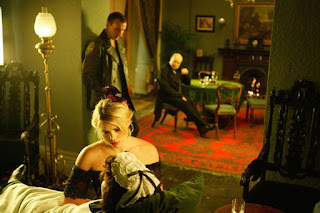 Unless I'm forgetting something, this is the only episode of the revamped Doctor Who series set at Christmas that wasn't produced as a "Christmas special." It's only the third Christopher Eccleston episode, and marks the first time him and Rose went into the past.

The past they wind up in is 1869. It's Christmas Eve and - despite trying for Naples - the TARDIS takes them to Cardiff. As is always the case, there's more going on than a celebration. An undertaker in the city can't seem to keep the dead to stay still: they've picked up a habit of rising up and making trouble. One, an old woman, kills a grieving family member, climbs out of her coffin, and proceeds with her plans for the evening: catching a live reading of A Christmas Carol performed by the author, who is quickly pulled into the story.

Also of note is the undertaker's psychic assistant, a woman about Rose's age who's developed a connection with the beings responsible. The zombies are actually being possessed by disembodied gaseous aliens, who require new hosts to survive. The Doctor takes pity on them and convinces the psychic to help them make the journey, a decision that nearly destroys the world. Despite assurances to the contrary, there are billions of the "spirits", and they're intent on making the Earth theirs alone. They want as many dead bodies as they can get their hands on, and there's no easier source than living ones.

Overall, it's a good, albeit flawed, episode. They give Dickens an interesting arc reminiscent of Scrooge's, though it's more a journey from cynicism to wonder than bad to good. Meanwhile, the psychic girl's tragic story is fairly poignant, even if her fate comes off a bit redundant - a female character sacrificed her life for the Doctor in the prior episode. This became an unfortunate pattern throughout the series: after a while, it stops feeling tragic and starts to get annoying.

Speaking of annoying patterns, the series often dangled a diplomatic solution, only to yank it away in a last-minute twist. The Doctor offers the aliens a peaceful alternative, but they never seem interested. I understand that conflict can make for good TV, but this already felt repetitive after the same thing happened in the first episode. The Doctor has the ability and will to help the "monsters" meet their goals with no loss of life, but they never seem interested in hearing him out. If a few had actually considered the option, it might have created a little tension throughout the series. As it is, it's hard not to roll your eyes and wonder why the Doctor's even bothering.

There are also a few moments where the writing gets sloppy and the story starts unraveling. For instance, it doesn't really make sense that the zombie at the beginning went to see Dickens, since the alien, not her, was ostensibly in control.

These issues aside, the episode offers a great mix of humor, adventure, and light horror. The psychic's reaction to Rose's modern attitude is well considered and believable, and the use of Charles Dickens as a protagonist works well. Likewise, the visual effects were extremely well executed.

The Christmas elements are primarily built around Charles Dickens. Needless to say, they're thematically linked to A Christmas Carol, a fact Dickens himself seems to appreciate. And while the depth of his skepticism isn't entirely believable, his use of reason makes for a satisfying finale.

This works as a fun, creepy Christmas ghost story with science fiction elements... even if those elements are a bit of a stretch. It's definitely worth your time.
Adventure Comedy Episode Erin Snyder Highly Recommended Horror Science Fiction Steampunk