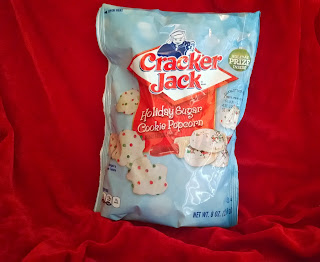 I saw this in Walgreen's and had to have it. I love the concept; it's such a ridiculous thing to make 'holiday'. 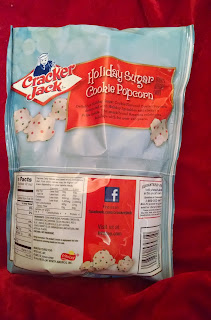 The hilarity starts on the back of the package. It mentions "The snack brand America celebrates holidays with for over 120 years." Which a) is not a sentence, and b) I guess they mean Frito-Lay? Because Cracker Jack is not a holiday tradition. If it were they wouldn't be resorting to weird seasonal flavors! 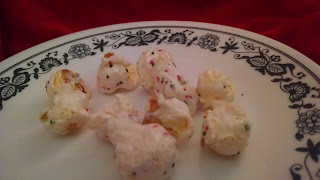 The popcorn inside doesn't look like much. Part of the appeal of traditional Cracker Jack is that caramel color, and this is just white and sort of melted-looking. The red and green nonpareils are there to make sure you know it's Christmas.

The taste is pretty good, though! The candy-like coating tastes of sugar and butter, meaning it does actually taste as though someone liquified some frosted supermarket cookies like the ones in the picture and poured it over popcorn. Not high-class fare, but tasty enough. 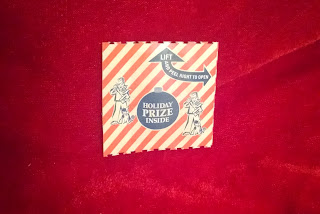 But wait, there's more! Cracker Jack prizes have been getting sadder and sadder over time. I think they are only still there because of tradition. If you haven't had Cracker Jack in years, you may not know that all the prizes are paper now, because I guess they got sick of kids choking on plastic.

So in this package, there's a holiday prize, and it is.... 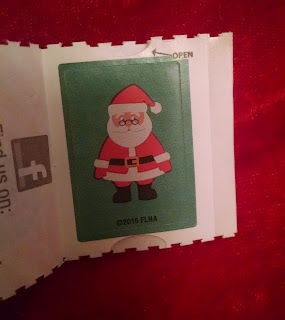 This crappy Santa sticker. He doesn't even look jolly, just sort of unnerved.

Well, the popcorn is still tasty. 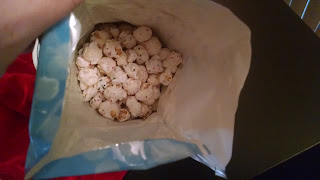