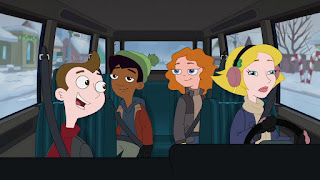 Milo Murphy's Law is an animated Disney series from the creators of Phineas and Ferb. It's also in continuity with that show, featuring callbacks and eventually crossovers. I'm a big fan of Phineas and Ferb, so I was naturally interested in this, but - like so many things - it was difficult following at first. Once Disney+ launched, I caught up with the first season, which includes a Christmas episode.

I should probably get this out of the way: the series, while well written and interesting, lacks the alchemy that made Phineas and Ferb exceptional. The characters just aren't as endearing, and the premise lacks the whimsy that really elevated its predecessor into something truly great. This is still good television, but (at least so far) it hasn't managed to recreate the magic.

Half the series revolves around Milo Murphy, the youngest in a family who "Murphy's Law" was named after. In theory, whatever can go wrong around them does, though what this means varies from episode to episode. Sometimes, it really seems like reality is out to get them, other times it functions as heightened entropy that can be used as a tool by Milo and his friends.

The other half of the premise concerns Cavendish and Dakota, a pair of time agents originally tasked with saving pistachios from extinction. At first, they're introduced as potential antagonists for Milo, but partway through the first season, they become friends.

The Christmas special follows two unconnected plot lines, one concerning Milo's attempts to get his extended family together as a surprise for his parents, and the other focusing on future versions of Cavendish and Dakota.

Milo's story is fairly straightforward: each time he meets up with a family member, something goes catastrophically wrong. They always overcome the issue (the theme of the show is more or less that no obstacle is a match for optimism), but lose time in their race against an approaching blizzard. Finally, he gets his extended family together, but they're caught by the storm. Unable to make it home, they head to the mall, which is conveniently where Milo's parents were trapped anyway (again, the rules around "whatever can go wrong" are kind of lax). They meet up and decide to have a family dinner at the one place that's open: a Chinese restaurant.

While all that's going on, we're introduced to far-future versions of Cavendish and Dakota, years after their friendship fell apart due to an argument at an office Christmas party (which is still in the future, just not so distant a future) over an egg roll. Each separately resolves to go back in time and prevent the argument. This escalates into a comedy of errors as they inadvertently thwart each other in a cascading series of absurd attempts. Finally, the two old men talk to each other, realize they're on the same side, and team up. This... escalates into even more absurd attempts to change their past. Finally, they just talk to their past selves. This, of course, actually solves the issue. All future versions of Cavendish and Dakota vanish (there are dozens by this point), and the "normal" two decide to go out for egg rolls. Naturally, they head to their past (i.e.: our present) and wind up at the same restaurant Milo's family is at.

The Milo half of the episode is of course leaning on traditional Christmas special tropes around getting the family together for the holidays. The Cavendish and Dakota naturally involves a great deal of time-travel, which... I think we've covered the history of that sub-genre and Christmas about as extensively as is possible. I was a little surprised to see time travel used heavily without trying to pull in Christmas Carol references (at least I didn't catch any). This went with time loops and stacking iterations, not unlike the 2013 animated movie, Saving Santa. This used simpler rules for time travel than Saving Santa, so you won't see upcoming iterations of Cavendish and Dakota prior to them circling back, which is a little disappointing. On the other hand, this managed to be funny, which is more than I can say about Saving Santa.

Both halves were amusing, in fact. The writers have proven time and time again they know how to land a joke. And tying everything together with a Chinese dinner (and thus a nod to the classic-but-ridiculously-overrated A Christmas Story) was certainly clever.

All in all, this is was a solid episode of a solid series that represents a neat experiment in television. Sadly, it's an experiment that doesn't quite work as well as I want it to.
2017 Comedy Episode Erin Snyder Science Fiction