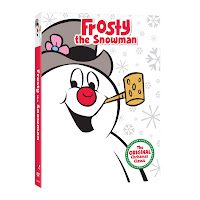 When you filter out the sequels, knock-offs, and derivative works, I count four quintessential animated holiday specials: How the Grinch Stole Christmas, A Charlie Brown Christmas, Rudolph the Red Nose Reindeer, and Frosty the Snowman.

That isn't to say that those are necessarily the best specials out there (though The Grinch and Charlie Brown are definitely in the running), but they're the most iconic, the most "classic."

And, for years, I've been of the opinion that three out of four of them deserved that honor.  The exception being Frosty, which I considered poorly animated, cheesy, and just not particularly interesting.

When we slid the DVD in, I was wringing my hands in anticipation of ripping it apart when I wrote this article.

Then a funny thing happened.  I liked it.

Maybe I just hadn't paid attention the last few times I watched.  The writing is actually quite clever, and the pace moves along at a fair clip.  The relationship between Karen and Frosty is sweet, and the drama, as each sacrifices their own well-being for the other, plays out well.

Sure, it has faults.  The villain is played for cheap laughs (most of which fall flat), the designs aren't particularly inspired, and the animation quality is far from spectacular.

But, all that said, I really enjoyed this viewing.  At a half-hour, this is absolutely worth catching up on.

Plus, the children commit at least three serious crimes: stealing the hat (ignore the narrator - it's clearly the legal property of the magician), breaking into a refrigerated railroad car, then breaking into a greenhouse.

Not a lot of respect for private property.

Anyway, I'm sure you can find this on TV, streaming, or DVD.
60's Classic Erin Snyder Fantasy Special