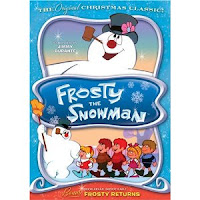 As is often the case, the "Frosty the Snowman" DVD we took out of the library came with a second feature attached.

"Frosty Returns" is one of the most bizarre specials I've seen in some time.  It's highly uneven, containing some brilliant humor interspersed with some of the most awful songs ever composed for a Christmas special (I'll let that sink in for a minute).

Even worse is the narrator, a sort of cross between a lumberjack and pixie who appears at the start and end of the special riding on a snowflake.  This thing would make Mr. Mxyzptlk cringe.

There's very little tying this to the original special, though Frosty's appearance does seem connected with another magic hat.  Unlike the original, his existence doesn't seem dependent on it - he's able to remove it and even give it back.  The end gives the implication that he's some kind of nature spirit or snow elemental, which certainly fits the overall theme.  Maybe he hangs out with Swamp Thing.

Neither the animation nor design are rooted in the original special.  If anything, they seem to have been derived from Peanuts, both in appearance and behavior.  Meanwhile, vehicles spraying snow-remover look like they rolled out of a Dr. Seuss book.  In the animators' defense, all of this felt more like tribute than theft.

In terms of story, "Frosty Returns" is a heavy-handed (not to mention simplistic) metaphor for global warming.  Even for this environmentalist, it gets painful pretty fast.

For all its negatives, the writing is actually fairly good when they're not ramming their message down your throat.  Ultimately, it's worth seeing this thing once just to hear a kid suggest they go outside and build a fertility goddess in the snow.

As a rule, this seems to come packaged with Frosty

, regardless of which version you get

, despite the fact there are more in-continuity sequels out there.
90's Erin Snyder Fantasy So Bad It's Good Special