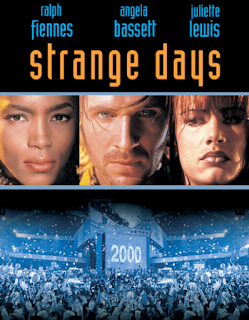 Before I even get into the spoiler warning, I want to open this with a content warning. The movie I'll be talking about includes a sexual assault, and while I won't go into much depth in the review, I found it disturbing even relative to other films that touch on that subject matter. [Editor's note: I found this scene incredibly upsetting to watch. I was glad I sought out spoilers ahead of time so I knew what I was in for - Lindsay] If that's not something you're willing to sit through, you'll want to steer clear of this one...

...And I needed to open with that, because this is one of those movies where plot spoilers could impact your experience quite a bit. And also, yes, this is a pretty great sci-fi noir flick directed by Kathryn Bigelow, so it's probably worth your attention, assuming the last paragraph isn't a deal-breaker. The film definitely has some issues aside from that, so it's not like this is required viewing or anything, but it's good enough to warrant a recommendation.

Set in Los Angeles on December 30th and 31st in the then-near-future of 1999, Strange Days kind of sets itself up to be dated. In some ways, it plays like a bizarre artifact, while in others it remains eerily timely. A large portion of the movie depicts escalating hostilities between a militarized, racist police force and the public it's supposed to be protecting, so that's still relevant.

The main genre element comes in the form of wearable technology that records experiences. These are somewhat believably used for a combination of pornography and high-adrenaline criminal activities, both of which are illegally sold to businessmen looking for some excitement.

This is one area where I think the movie dates itself a bit awkwardly. Tying this back to the political themes, I'm assuming this was originally intended as a sort of high-tech twist on the widespread availability of recording devices that began reshaping society's understanding of police brutality in the 90's. While this was of course prophetic in recognizing the growing significance of recording technology, the movie was way off the mark in the role those devices would play. The plot of the movie centers around the assumption that such a recording would need to be manually transported and copies would be time-consuming to produce. Those assumptions made a lot of sense in 1995, but feel sort of antiquated in a world where cellphone footage of police shootings can be uploaded instantly.

To put it another way, the movie was made in an era when physical media was as important as the data it held. This obviously isn't an issue in the storytelling, but the schism between how the movie thinks nearly invisible recording devices would be incorporated into society and the reality is a bit jarring. But it's also neat to see a sort of window into an alternate world. These ideas aren't lazy: the writers (including James Cameron) put some serious thought into this future.

If you're thinking I've written quite a bit without touching on the plot, rest assured it's because I've been stalling. This thing is... it's complicated.

Again, that's not a complaint. The movie is fundamentally a mystery that incorporates the aforementioned cyberpunk-inspired technology, murdered rappers, a call girl on the run, rumored LAPD death squads, the encroaching millennium, and - if some characters are to be believed - the end of the world (more on this later). And it does all that from the perspective of Lenny, a psychologically broken man trying to save his singer ex-girlfriend from a dangerous, abusive manager.

The first time I watched this, I had no idea where any of it was going. The movie points you in countless different directions as it twists its way from one sequence to the next. The main character is Lenny (played by Ralph Fiennes), a sort of trickster/hustler illegally selling recorded experiences as if he's a drug dealer selling to wealthy elites. His best friend, Mace (played by Angela Bassett), occasionally feels like she's about to take over the lead role (which wouldn't have been a bad thing). Somewhat refreshingly, Lenny is portrayed as a slick, emotionally fragile figure, while Bassett gets the stone-cold badass role.

There's also a love triangle going on, with Mace being in love with Lenny despite his faults and his ongoing obsession with his ex. I don't mind the dynamic, though I really could have done without the tone-breaking kiss at the end.

So, ignoring order of events, the short, spoilery version is that a couple racist police officers murdered two rappers during a traffic stop that an acquaintance of Lenny's witnessed and recorded. It takes about half the movie for this reveal, and by that time the woman who saw it was raped and murdered by someone who recorded the event and left the tape for Lenny, drawing him into the mystery.

All of this was an elaborate play to assassinate Lenny's ex-girlfriend's manager and pin the crime on Lenny. And while this is going on, the police who assassinated the rappers are trying to cover up the crime. So everyone's in danger, there are multiple groups trying to kill Lenny, and he has no idea who or what is behind anything for most of the movie. More importantly, he doesn't know how "high up" any of this goes.

The movie dangles the idea this could be part of a massive conspiracy of police planning a war on black communities. And in the background, there's also a question of whether or not the world itself can really go on past midnight. The movie makes a point of telling us the time, reinforcing that notion again and again. You're watching a countdown: what will it mean when the clock hits zero?

And ultimately the answer is "nothing." There's some violence as Lenny finally confronts the man behind the killings and Mace defeats the cops, only to have that situation escalate. But everything gets shut down pretty fast, mainly because there was no massive conspiracy: just a bad system that gives bad cops too much leeway. The world doesn't go crazy, nor does it end. The New Year (and new millennium) start, there's a party, and the survivors are brought in to answer questions. The last shot of the movie features the time, which is now a few minutes past New Years. The world didn't change, because that's not how history works.

It's an effective end that's only somewhat undermined by the preceding five minutes. See, I kind of glossed over those fights: things get a bit melodramatic.

First, Lenny's fight concludes with an unnecessary homage to Die Hard with the villain falling to his death and almost taking Lenny with him. Meanwhile, Mace's attempts to bring down the cops who murdered the rappers is ultimately resolved with their superior learning the truth and ordering them arrested. Rather than just *have that happen* the movie has one commit suicide and the other attempt to gun down the main characters only to be shot by his fellow cops first (so... kind of another Die Hard homage, I guess). It all feels melodramatic and unnecessary. Just arrest them and show them crying - the shootout breaks the tone.

It's not the only time the movie drifts into melodrama. Occasionally, the dialogue will get a little... well... remember how I said Cameron helped write this? It shows, both for better and worse. Likewise, it's not great that this is a movie about racism directed towards the black community told by white people mostly from the POV of a white character.

But also recall Kathryn Bigelow directed it... and it looks incredible. This is grounded science-fiction with a strong tone, fantastic performances, and beautiful shots. The movie sells its ideas and story even when sections of the script let it down.

I've mostly covered the New Year's elements, which are central to the premise and theme. Granted, it's less "New Years" in the general sense than the specific New Year's Eve of December 31st, 1999. It feels like that should be an issue, but honestly the themes that connect with this resonate with ongoing issues around police brutality and racism to a degree that makes the two-decade-schism academic.

This movie certainly has issues, but it's also one of the best science-fiction holiday offerings out there. It's a smartly structured, well-directed movie that holds up on re-watch. I recommend it to genre fans - just understand it's got some flaws.