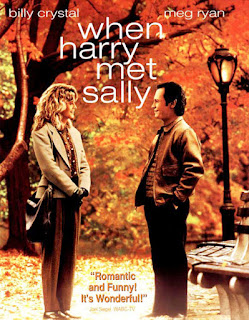 I think I've watched this movie at least three times since the creation of this blog simply to reconsider whether or not it qualified as a Christmas movie (this is, of course, in addition to countless viewings growing up - this is one of my mother's favorite movies, so it was on a lot). Because this is more a New Year's movie than a Christmas one, it never quite passed our litmus test, which I always regretted, since this movie - in my humble opinion - absolutely rules.
Well, now we consider New Year's an extension of Christmas (since, you know, it is), so the question's moot, and we can talk about one of the most iconic romantic comedies made in the last four decades.
The story, of course, centers around Billy Crystal's Harry and Meg Ryan's Sally, both of whom are awkward and somewhat off-putting. They come across to the audience as eccentric and likeable for the duration of the film, but the movie succeeds in making you doubt you'd enjoy hanging out with them if they were real. You like them as characters, but it's not a stretch to imagine other people growing sick of them both. Because these aren't particularly likeable people, the movie effectively turns the romcom cliche on its head: instead of being about two people realizing the other is the one person who can truly make them happy, this is a story of two people gradually realizing they've found the one person who will be happy with them. Simply put, in the long run, no one else would really be able to stand being in a relationship with either of them.
At the start, they don't even get along with each other. The movie begins with them, right out of college, driving from Chicago to New York together. The trip is a disaster, and they quite literally arrive and agree not to be friends in a moment that lays the foundation for the movie's theme: Harry argues it's impossible for men and women to be friends, due to the existence of sexual attraction.
I want to pause for a moment, because I've seen people complain the movie ultimately endorses this viewpoint by having Harry and Sally get together. I think that reading does the film a disservice: while Harry and Sally do wind up married, their relationship - and even their love - is founded on friendship, rather than sex. Both come out of failed relationships where that isn't the case. If anything, Harry's entire character arc is built on the realization that the emotional intimacy of friendship is more fulfilling than sexual intimacy. His thesis isn't just wrong because men and women can, of course, be friends outside of a relationship, but also because the notion a loving couple can't be friends is completely misguided.
The movie even showcases a number of older couples shot in a faux-documentary format to illustrate this. Yes, they're telling their individual love stories, but in each case, the couples interact like old friends. Of course, men and women can be friends - if you want a healthy romantic relationship, you need to be friends.
If it feels like I'm talking more about theme than plot, there's a reason for that. While there is a plot (in fact, I'd argue it's unusually cleverly structured for the genre), it effectively disappears into the background, allowing the relationship and pacing to feel natural. Each character beat has a catalyst, but these are far less memorable than the jokes or reactions - it's character-driven, which makes it difficult to synopsize in a meaningful way, so I'm just not going to bother.
I will say the subplot about the relationship that develops quickly between their friends, Marie and Jess, is hilarious (Jess, incidentally, is played by Carrie Fisher, who, as always, is fantastic). It works as a good counterpoint to Harry and Sally's slow-moving story.
Now then. Let's talk Christmas.
I could almost make a case for this even without New Year's, because of some interesting time jumps. A little before the halfway mark, the setting shifts to the holidays and stays there for a while before leaping ahead. It kind of leaps around through the year and arrives at Christmas again for the climax, with the resolution falling on New Year's Eve. There's definitely a lot that happens in the year between Christmases, but it's easy to forget how everything's spaced out and walk away with the impression half the movie's set at Christmas, even though that's not at all the case.
Still, it establishes the holidays as a point when time effectively pauses for reflection and resolution. The characters more or less say as much at the end while musing about the song, Auld Lang Syne. This is also where Sally sums up the song (and more importantly the movie), saying, "Anyway, it's about old friends."
If you really want to nitpick there are a number of moments you could bring up, or you might point to the inconsistent tone or something. This isn't a flawless movie, but...
It just works so well. It's fully sweet and surprisingly thoughtful. It's a smart romantic comedy that hits all the classic beats but in ways that feel completely fresh and original. I love this movie - it easily belongs on the shortlist of best romcoms ever made, as well as the list of best New Year's movies out there.
80's Comedy Erin Snyder Highly Recommended Movie New Years Romance