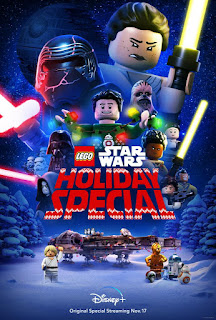 I can forgive The LEGO Star Wars Holiday Special for being bad, but I can't forgive it for not being bad enough.
The original Star Wars Holiday Special, of course, is a thing of legend. It's impossibly bad, unbelievably bizarre, and utterly mystifying. It's never officially been released, and everyone involved seems ashamed.
I'm not saying this had to be that bad, but it had to be... something. Most importantly, it needed to be memorable, and The LEGO Star Wars Holiday Special is already fading from memory minutes after watching. I guess I better get the plot down before it's gone for good.
Set soon after Rise of Skywalker, the special opens with Rey trying (and failing) to train Finn to become a Jedi while their friends are preparing for Life Day. Blaming herself for Finn's lack of progression, Rey follows some advice in an old Jedi tome and heads out in search of a lost Jedi temple. BB-8 accompanies her for some reason.
They locate the temple and come across a mystical artifact that opens portals in time, allowing her to spy on Jedi masters through history in the hopes of learning their technique. Things go wrong when she stumbles into the Death Star II during Return of the Jedi and is discovered by Palpatine and Vader, who follows her to her next destination.
The next few minutes are mostly just a random assortment of time jumps to recognizable moments, resulting in a bunch of LEGO characters being displaced. The only ones who actually matter are young Luke, Rey, and Vader, who eventually gets the time key and heads back to the Death Star. Rey, thinking all is lost, laments her decision, which prompts Force Ghost LEGO Yoda to show up and tell her the true meaning of Life Day. Oh, and he reveals she can activate the time jump power without the key, because of the magic of Life Day or something.
Meanwhile, the Emperor uses the time key to go into the future, where he meets and recruits Kylo Ren. Rey shows up to get the key back, prompting a fight with Rey, young Luke, and Return of the Jedi Luke on one side, and with Vader, Kylo, and Palpatine on the other. Needless to say, Vader eventually switches sides, because that's how Jedi ended.
With all that out of the way, Rey heads back to her friends, who have been celebrating Life Day this whole time.
The jokes aren't awful, but they're rarely all that funny. A handful stand out, but mostly they're the obvious gags you'd expect (Han shoots first - get it?). I will acknowledge there's at least one mildly touching moment when Rey says goodbye to Ben Solo. There are numerous other attempted moments about friendship and so on, but none of those work at all.
The lead characters are all voiced by voice actors, but a handful of minor roles are filled by the original cast - Kelly Marie Tran, Billy Dee Williams, and Anthony Daniels all contribute to this (incidentally, that means Anthony Daniels is the only cast member to appear in both the original Star Wars Holiday Special and in this).
It's neat having a few of the stars around, but honestly I felt like they were wasted. None of them had more than a handful of scenes, and they were all relegated to the B-plot about decorating and cooking for Life Day. I find it especially troubling that this wasn't able to use Kelly Marie Tran any better than Rise of Skywalker. She deserved much better.
On a more meta level, I kind of feel like this made the same central mistake the original made - they handed the franchise over to people with experience in a different medium and let them make whatever they felt like. It certainly wasn't anywhere near as bad (the writer was clearly familiar with the franchise), but this wound up feeling like a cheap parody, rather than a new spin on the concept. And, frankly, there's no shortage of official Star Wars parodies out there (Family Guy and Phineas and Ferb have both made ones far more clever than this).
This certainly isn't the worst animated Christmas special out there, nor is it the worst Star Wars thing I've ever seen. But if you're invoking the memory of the Star Wars Holiday Special, you owe it to multiple generations of fans to produce something that's either spectacular, horrible, or both. Middling and kind of boring just won't cut it.
2020 CG Erin Snyder Fantasy Science Fiction Special Toy