I remember seeing this title about a reimagined Santa hit stores. I've always been intrigued but also very tentative about it.

A big part of why I never read this book before now is that I've been burned before on Santa retellings, and the cover art was fairly realistic/Conan in style, making me think it would be too dark. I have strong opinions on what is appropriate Santa behavior and what is not. I have a history with this character that I'm protective of. In short, I have FEELINGS about this topic.

I love the ridiculous line the book tries to walk from the first page. It's not actually realistic in any sense, but it's treating ludicrous situations and characters seriously. It's practically pulling from Santa Claus Is Coming to Town, with a town under the thumb of a cruel ruler who has outlawed toys and joy. Klaus lives outside of town and has a bond with a giant white wolf. When he sees the injustice and sadness in the town, he is upset, although at first, he doesn't plan to do anything about it.

Now, I should say here that Grant Morrison is usually a great author for wild ideas, although he's not always 100% on execution and follow-through.

I was enjoying the ride, enjoying the balance of sweetness/naivete and fierceness in Klaus's character. (He's very much akin to a well-written Superman, with less power and a little more physical edge.) It was a charming story, and I was curious about where it was going. And then at the end of issue one, suddenly -- magic psychedelic alien-looking ghost-things. I laughed aloud. THERE'S the Morrison I know. 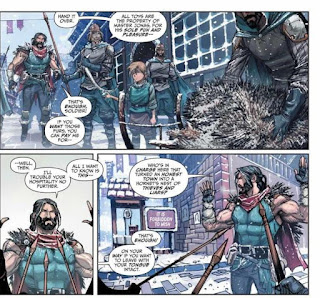 I won't go over too much more of the plot, but I liked the backstory, I liked the romance, and I liked the magic. I liked the way the villains were given nuance, especially the kid of the ruler. While I was reading, I had made some notes for this review about the role of kids in Santa stories, and wouldn't you know it, the book put some of my words in Klaus's mouth for the finale.

The final villain is horrible to behold and just right for the world. The art is beautifully detailed, but always bright and easy to follow.

My only criticism is that sometimes the story seemed to skip ahead -- maybe there was a page-count issue? A few times I flipped back and forth to see if I'd missed something, but plenty of ideas (e.g., evil books, the existence of a Yule spirit, the name "Santa") are just dropped on the reader with no introduction as though they've already been established.

Despite that, this Santa-as-superhero take is delightful.

P.S. - This mini-series has been followed by a series of annual one-shot stories that have ramped up the superhero-flavor, the action, and the sense of an entire yuletide-magic-universe. I've read a few and they're fun, but I think I prefer this first story, at least so far.
Comic Fantasy Highly Recommended Lindsay Superhero