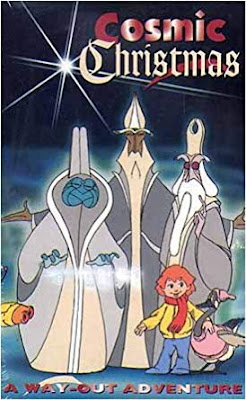 I stumbled upon this early Nelvana production and immediately knew we had to watch it. (I’m mostly familiar with Nelvana because they produced all the Care Bears material in the 80s, but they’re a prolific children’s media production company based in Canada.)

Apparently, when the young studio was trying to break into commercial animation, market research indicated a need for new Christmas television specials. Given a UFO sighting in Toronto and excitement for a then-upcoming movie about some wars in the stars, a sci-fi tinted holiday story must have seemed like just the ticket. And it worked! According to Wikipedia, the popularity and sale of this special put Nelvana on the map.

It's hard to imagine, now in the era of Peak TV, that long-ago time when networks were so starved for content that this quirky, hit-and-miss piece would cause a stir.

Our main character is Peter, a totally generic kid except for the fact that he has a pet goose. Why? We’ll get there.

Peter and Lucy the goose (I don’t think it’s a weird Narnia reference...?) are walking downtown, observing people annoyed by the holiday rush and getting hassled by teenagers, when he sees a light in the sky. In case you thought there would be any subtlety, it’s first seen in reflection overlapping with a nativity scene. No one believes him when he tries to point it out to others.

Later, Peter heads home through the snowy woods, goose in tow, when he comes upon the source of the light: a round, glowing UFO. From its mysterious opening come three tall aliens who bear a not-insignificant similarity to "wise men." Peter tries to ask a bunch of questions before realizing that’s probably silly, but the head alien tells him they have universal translators.

They’re on earth investigating its proximity to a “heavenly event” thousands of years prior, and Peter realizes they must be talking about the Star of Bethlehem. He gives them some super-quick Cliffs Notes about the history of Christmas and the aliens are eager to understand it for themselves.

Unfortunately, all the people that Peter and the aliens observe are being uncharitable, cranky, or otherwise negative. We find out that the teenagers from earlier are living by themselves in a shack with no heat or food, which will come up later. Break for a weird sequence in which the cartoonists goof around having the aliens' floating shape-shifting mascot play with the goose.

Peter finally brings the aliens home and his frightened parents and unflappable grandmother try to make their unusual guests welcome. At this point there’s another random musical sequence; in this one, the aliens create illusions based on the grandmother’s descriptions of how great Christmas used to be when everyone made their own decorations and spent hours cooking. Sure, Grandma, I’m sure it was a better time.

This is broken up by a commotion when the lead teenager, Marvin, steals Lucy the goose and everyone runs after him. In the woods, they pass back by the UFO, now surrounded by curious townspeople, including the incompetent mayor and chief of police. They all join the chase. Marvin tries to escape over a frozen pond, only to fall into the water. Peter goes out to try to rescue him, only to fall in himself. However, with the combined efforts of all the townspeople and the aliens (who comment that galactic control had better not be watching, as they were sworn not to interfere), the boys are rescued.

Upon being shamed by Grandma and the aliens into realizing that there are children with no food or family in their town, the townspeople come together to throw them a Christmas party and the mayor claims that no one in town will go hungry again. Because saying things makes them true. The aliens declare that they understand Christmas now, and after accepting an angel ornament as a gift, they take off, leaving an angel-shaped firework in their wake.

So... this was deeply weird. The animation on the aliens seems to be purposely off-putting: the motion is oddly jerky and the voices have a slight robotic filter. The voice acting is sometimes fine, sometimes mumbly and hard to understand. The writing flirts with cleverness, but just ends up being pretty obvious and uninspired. Why does Peter have a pet goose? So that it makes sense to try to steal it for food. Why is this town big enough to have a bustling downtown and no one notices teenagers living on the street but small enough that people live within walking distance in the middle of the woods with no other houses around? Why not? Why are there even aliens in this story? They don't have any actual impact that a couple of humans couldn't have had.

The combination of secular Christmas values (helping others, Dickensian charity) with Jesus presented as historical fact (“very special” but not necessarily supernatural) was an interesting wrinkle. I did like a running gag that the aliens introduced themselves by saying “Hello. How do you do. I am fine.” all in one go.

In the final analysis, this special is not good. But it is unique. And it's one to add to our very short list of science fiction Christmas specials.
70's Lindsay Science Fiction Special