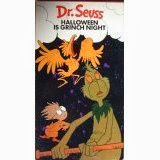 Halloween is Grinch Night was made in the late 70's, presumably in an attempt by Dr. Seuss to cash in on the popularity of How the Grinch Stole Christmas. It is in no way a great work of art, but it's nowhere near as bad as the last part of the "trilogy", The Grinch Grinches the Cat in the Hat.

There's very little plot to this thing. Mostly, it's a series of Seussical rhymes and jokes (almost all of which are below the expectations we've formed for the good Doctor). The special focuses on a Who named Euchariah who gets lost on Grinch Night and runs into the Grinch. He allows the Grinch to subject him to various horrors in order to buy time until daylight.

When I say horrors, I'm referring to a magic cart apparently full of specters, ghosts, and illusions; sort of a portable haunted house. The sequence is a little unpleasant, actually, not from the content but from the premise of a young child allowing a creepy man to subject him to scary things in the back of his carriage.

Other than that unpleasant subtext, the special is fairly mixed. There's some good tone work, at least in the first half. But the second half drags - the elements of horror come off as fairly bland, and the animation is dated.

The music is fine, but nothing special. The strangest song belongs to Max, the Grinch's dog, who laments on how he became the Grinch's slave. It wants to be dark, but really it just comes off as melodramatic and ridiculous.

I've seen it claimed this is a prequel to How the Grinch Stole Christmas, but that doesn't quite work. Max leaves the Grinch at the end, which throws a wrench into the larger continuity. I suppose this could actually be a sequel - there's nothing in the original that says the changes to the Grinch were permanent.

The production values also took a hit here. The animation is far less appealing, and there's something seriously off about the color. Boris Karloff died long before this was produced, and the replacement Grinch isn't in the same league.

This really isn't something you have to see, but it's not awful, either. There are a few decent jokes, and the sound's good enough to deliver a bit of all-ages Halloween dread. If you're curious, it's pretty easy to track down on Youtube. Just don't expect too much.
70's Comedy Erin Snyder Halloween Horror Special