Premise: Victoria “Vic” McQueen has a special talent: she can use her bike and a bridge that isn’t there to find lost things. Unfortunately, Charlie Manx has a talent too. Vic is the only child to escape from Manx’s one-way trip to Christmasland, but it takes more than luck to break an evil man, and every power comes with a price. 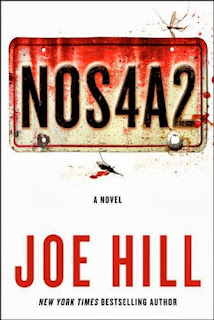 I thought this book was good, but I’m not sure I actually enjoyed reading it. The tone wasn’t quite my cup of tea, and it needed to be more tightly written.

Some positives: Vic herself is a great protagonist. She’s broken and flawed in completely believable and sympathetic ways. She’s brave when she has to be, even if she has to talk herself into it. The talents are interesting. Broadly and only vaguely defined, they hint at much more out of sight. The writing is quite good: the descriptions of the supernatural and creepy as well as the mundane and everyday were evocative and often poignant.

The use of the Christmas motif as the villains’ theme works, both on a creepy-as-heck level and a thematic level about the horror of childhood without morality. Manx takes the children he abducts to “Christmasland”, which is a lot like an old-fashioned Christmas cartoon on acid, and the use of his powers are accompanied by Christmas music or decorations.

However, there were a few big negatives as well from my perspective. The villain’s henchman talks a lot, graphically, about rape. I found it upsetting, even though a sexual assault is never carried out on “screen”, so to speak. And I know that it’s in the story to emphasize the evil and the wrong-ness of this very broken, indescribably horrible person, but for me it detracted and distracted from the more interesting themes and plots.

Also, the book was just too dang long. The description was all lovely, but it went on for ages. The book takes place over something like fifteen years or more, and way too much of that time is actually described. There’s just too much meandering plot and extra moments. Many of those moments are good, but they do not drive the story forward.

Then after sidetracking for pages and pages, the ending felt incredibly rushed. I had some trouble following the actual events of the climax, and the emotional ending was a bit lacking as well. It comes very, very close, but I just didn’t end feeling satisfied.

I was very amused that Hill (Stephen King’s son, let’s not forget) places his story somewhat nebulously in the same world as both his father’s vast semi-shared universe of tales, and his own very popular Locke & Key series. It doesn’t affect the plot, it’s just a side note, but it made me smile.

In the end, if you like Christmas-related horror and long reads, this is probably just what you’re looking for. It just wasn’t entirely what I wanted.