Showing posts with the label Italian
Show all 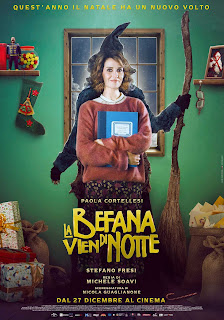 La Befana Vien di Notte is a live-action Italian fantasy/superhero/comedy/adventure/children's movie about Befana. I probably shouldn't assume everyone reading this is familiar with Befana: she's a legendary witch who delivers gifts to the kids of Italy on Epiphany Eve (January 5th). The easy explanation is she's "like Santa," which isn't inaccurate, but feels reductive. There's a lot of debate over just how old the legends are and where they come from: I'm not going to get into any of that here. What's important is this idea isn't invented for the movie, and in Italy this would come across like a big-budget Santa Claus movie. The problem we ran into trying to watch La Befana Vien di Notte is that this isn't Italy, and the film hasn't received a proper US release. Amazon has a version up, but the language options are limited. There's of course a dubbed English track, but... Okay, side note. I'm pretty firmly entrenched on th
Post a Comment
Read more
More posts