Robbie the Reindeer: Legend of the Lost Tribe (2002) 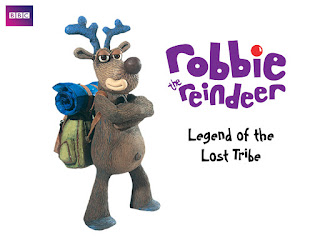 The 2002 sequel to Hooves of Fire is, at least in my opinion, an improvement over the original. The story is no longer tethered to that of an 80's sports movie, and the new elements feel much more inspired and original.

The story this time centers around a "lost tribe" of Vikings, who are essentially dwarves in this world. In a backstory relayed by Old Jingle, we learn the last of their kind were supposedly killed off in a civil war waged when all the Vikings got bored.

Robbie's the only one who's seen any of the Vikings, and no one really believes him. They're more concerned with their failing resort, anyway. Why are reindeer running a tourist resort? Because Santa gives the toys away, so he's got nothing to pay them, obviously.

Meanwhile, Blitzen, who's been in prison since the end of Hooves of Fire, is released and returns to the lodge. Initially, the others throw him out, but he convinces them to let him stay when he promises he can turn the business around. Then he promptly betrays and captures them with the help of an army of giant rabbit goons led by a master of disguise who's essentially a parody of Bugs Bunny.

We're about five minutes in, incidentally. This thing is bonkers.

Robbie, Donner, and Prancer escape and go looking for the Vikings, though Donner and Prancer are captured before finding them. Robbie asks for their help, but they explain the reason they survived the fall of the Vikings is that they were cowards, not warriors.

Robbie is then kidnapped by not-Bugs, who brings him back to Blitzen, who's using mind-control helmets to force the reindeer into masquerading as animatronic ones in an amusement park he's built.

I told you: bonkers.

The Vikings show up and save Robbie, who rescues his friends. There's a big fight in which at least one of the rabbit goons is pretty clearly killed off-camera. All this culminates in a parody of the speeder chase from Return of the Jedi where Robbie and Donner go after Blitzen, who winds up helping them resolve some issues with their relationship before getting taken down and sent back to prison.

But, honestly, that makes for a better tone than we got the first time. I liked the evil rabbit captain and his army of giant bunnies. The Vikings were great, too. This felt more like a claymation Looney Tunes than leaning too heavily on Rankin-Bass tropes.

That said, it's got a few issues. Robbie still isn't a particularly likable character, though the fact he spends the vast majority of this at least trying to be a hero helps. But the subplot around his ongoing relationship with Donner (which I barely touched on above) was an obvious cliche - he's worried she'll get hurt and therefore doesn't trust and/or listen to her. That's arguably supposed to form the emotional core of the special, so it gets pretty obnoxious.

I should also mention that, aside from the fact these characters are technically Santa's reindeer, there's really nothing festive about this special. It's set in the off-season, Santa doesn't play a role in the story, and the holidays are barely mentioned. You could actually switch out the characters with generic anthropomorphic animals and tell the same story.

But they told it with Christmas reindeer, so this counts.

Overall, this was a solid special, but not quite a spectacular one. I enjoyed it quite a lot, but I wouldn't put it on a list of favorites. Still, it's worth checking out if you have the time.