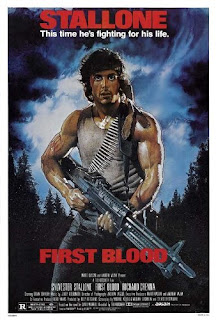 Add one more to the list of movies you probably didn't know were set during the Christmas season - until rewatching it, I really didn't notice. It's easy to miss: I didn't notice it coming up even once in conversation, and the majority of the film is set in the wilderness, where it's irrelevant. I'll have some more thoughts about the holidays in a moment, but first I want to talk about something else I'd forgotten.

This is a great movie. I remembered it was good, but that really doesn't do it justice. This is an incredible achievement - one of the best action movies out there, possibly on par with Die Hard.

First Blood opens with Rambo in a rural Washington town trying to track down a friend he served with in Vietnam. He locates the house only to learn his friend died of cancer caught from exposure to agent orange. Rambo, in shock, wanders into the village, where the local sheriff offers him a ride, which is really just an excuse to try and run him out of town.

Things escalate when Rambo starts experiencing flashbacks to his time as a POW. The sheriff, misinterpreting his reactions as hostility, arrests him. Rambo's flashbacks get worse at the police station. After a few officers rough him up and threaten him, Rambo breaks out, hurting - but not seriously injuring - anyone in his way.

Considering he's ostensibly the movie's antagonist, the sheriff is surprisingly rounded. He abuses his power and is quick to judge, but he's not evil or even especially cruel. As the movie progresses, he heads in a slightly darker direction, but at no point does it feel like he deserves to die. A lot of this was likely due to the long development process - according to Wikipedia there were something like sixteen drafts over almost a decade, several of which with the sheriff as the POV character. It makes for an unusually balanced action movie.

After a chase, events reach a point of no return when one of the officers Rambo beat up earlier ignores orders and tries to kill him. Rambo fights back, and the officer loses his life in a resulting accident. This soon transitions into a hunting sequence which is easily the best in the movie and quite possibly one of the best in the genre. A half dozen officers go after Rambo, who easily turns the tide. He lets all of them live (though their dogs aren't so lucky), but several are badly wounded. In a real sense, this is horror movie territory, with the audience's sympathies existing completely with the monster. It's visceral, scary, and beautifully shot.

Less impressive is a subsequent scene where a group of National Guardsmen are played for comic relief. To be fair, this was funny, but it feels completely out of place in the otherwise stark film. After being presumed dead, Rambo makes his way through an old mine in yet another scene that makes you wonder how the hell the Academy overlooked this for cinematography and art direction.

Soon, he steals a military truck and heads back into town to take the fight to the sheriff. He manages to distract the rest of the police force with a fire, then shoots out a number of generators to limit the sheriff's visibility. After a shoot out, he subdues his enemy. Before he can kill him, he's stopped by the colonel who trained him. At this point, Rambo has a mental breakdown and starts crying. The colonel ends up taking him into custody while the sheriff, in serious condition, is taken to a hospital.

The ending was widely seen as a cop-out at the time, but it's aged incredibly well. The epic finale the sheriff's been driving towards, the ultimate battle between order and chaos, turns out to be a fantasy. Throughout the movie, he perceived Rambo as some sort of inhuman creature; the audience saw the same thing, though we were rooting for him. But ultimately, Rambo was just a human being. As he's explaining his state of mind to the colonel, he starts feeling mortal again. He's confused, scared, and unsure how to react to the world around him. He's lost and alone. It's a jarring and brave resolution to the movie.

Oh, yes! Christmas. The movie's set sometime around the holidays, though an exact date is never established. There is, however, an abundance of decorations and lights in the town.

I'm not a hundred percent sure why they decided to have this take place in December, though I do have a few theories. The least interesting of which is practicality. During this month, Washington State is cold (but not freezing), damp, and foggy. Visually, it's a good choice to make the setting seem harsh but survivable.

It's also possible the holiday was being used symbolically. When Rambo is blowing up transformers to shut down the power around the police station, Christmas lights are the most obvious casualties. It's not hard to perceive this as a sort of "Heart of Darkness" moment, where the illusions of civilization are being stripped away.

I suppose it's also possible they wanted to contrast the chintzy decorations in town with the evergreen trees and snow in the mountains. But I'm kind of leaning towards the Heart of Darkness interpretation, mainly because I like it.

If it's been a while since you saw this, I suggest watching it again. It can easily stand with Die Hard as one of the great Christmas action films.
80's Action Drama Erin Snyder Highly Recommended Movie