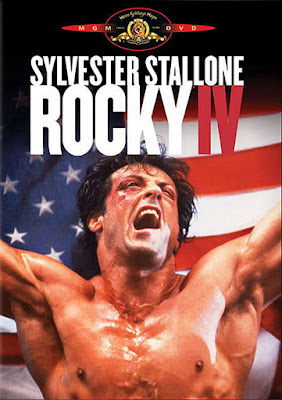 After Rocky's friend, Apollo Creed, is killed in the ring fighting a Russian boxer, Rocky flies to the Soviet Union, where he trains then defeats the Russian on Christmas Day. And... that's pretty much everything that happens. Huh. Usually the synopsis takes longer to write.

If you're confused how the above could fill 90 minutes, you are seriously underestimating just how many rock montages can be fit in a single movie. To be perfectly honest, I lost count. There's an argument to be made that this might qualify as a musical. James Brown shows up at one point.

Beyond the plot and montages, Sylvester Stallone (who wrote and directed the film) managed to find time to work in a robot helper which looks a little like a stereo system on top of a coffee maker. Also, it might be sentient. And Paulie may or may not be sleeping with it - the movie was somewhat ambiguous on this point.

Likewise, it is unclear whether Rocky and Apollo were lovers. 1980's sexual conservatism would suggest not, but it really seemed like they were exchanging longing looks at each other prior to Creed's death. Also, this interpretation would flesh out Rocky's otherwise unclear motivation.

The Christmas elements in the movie are somewhat baffling. Aside from the fact it was released in late November, there doesn't seem to be a reason for the last third to take place over the holidays. The movie tries to build some sort of theme out of it by having Rocky deliver a speech calling for unity, but it doesn't really make sense or fit narratively. The movie does a little better connecting the holiday visually to the snowy, Russian landscape (filmed on location in Wyoming).

To his credit, Stallone certainly tried to make the holiday relevant. There are a number of jokes and shots of decorations, plus Alvin and the Chipmunks gets played briefly.

Aside from functioning as a sort of unintentional comedy about Cold War propaganda, there's not much to recommend here. It can cross into that "so bad it's good" territory, provided you're easily amused by 1980's excess.

That said, I completely endorse the Wikipedia page for this thing. The robot's biography is particularly fascinating, as is the account of how Stallone spent eight days in intensive care after agreeing to film some authentic fight sequences against Dolph Lundgren.
80's Dramedy Erin Snyder Movie So Bad It's Good