By Erin Snyder - December 25, 2011
Before we wrap up our second year of Mainlining Christmas, we really need to correct an oversight. We've been meaning to get around to covering the three Futurama Christmas specials since day one, but we kept putting it off. Ironically, we were putting them off because we wanted to save them for when they were needed. Say, when we'd exhausted our supply of holiday specials and were waiting for Netflix to ship us something.

Well, it turns out that's never going to happen. Contrary to our naive assumptions, the internet contains hundreds if not thousands of hours of holiday cheer. I dare say we could run this blog every Christmas for a decade and not run out.

So, rather than rob our list of reviews of these three for yet another year, we're tackling them now. After some of the crap we've seen recently, these are a welcome relief. 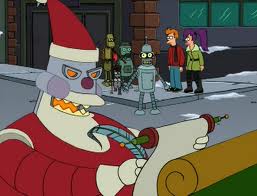 XMas Story (1999)
This was the first of the Futurama holiday specials, and it introduced us to Robot Santa Claus, voiced brilliantly by John Goodman. It turns out that the mythical Santa's now real, thanks to a kindhearted robotics company. However, while their hearts may have been in the right place, their minds weren't: in a subtle tip of the hat to Asimov's "I, Robot", Santa's naughty and nice thresholds were set incorrectly, resulting a seasonal murderous rampage. Fry, of course being unaccustomed to this, isn't prepared for the killer Santa and nearly gets himself (and everyone else) killed.

Of the three, this is both the best and the most restrained. The Christmas aspect permeates the episode, but there's also room for character development. The relationship between Fry and Leila is built upon, and Leila's history is touched on.

The holiday concept is still somewhat grounded, at least compared to what came next, though the concept is brilliantly twisted. This one's highly recommended. 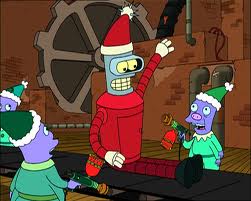 A Tale of Two Santas (2001)
The sequel, released a few years later, is still very good, though it's definitely more focused on revisiting a popular concept than it is in exploring the main characters and their relationships. This episode delves a bit further into the mythos of Robot Santa, visiting his workshop on Neptune. Fry, determined to save Christmas, succeeds in overthrowing the evil Claus and replacing him with Bender. Unfortunately, things don't go as well as hoped during the Christmas run, and Bender winds up on death row.

There are some good jokes - it's still one of the better dark Christmas comedies out there - but I don't think it rises above that.

The Futurama Holiday Spectacular (2010)
There seems to be a law of diminishing returns at work, which would be a harsher indictment if the first special weren't so damned amazing. Yeah, the second's worse than the first, and this one's the worst of the bunch... but it's still pretty good.

Robot Santa makes an appearance, but he's more or less just there for a cameo. Rather than telling a single story, this one explores three separate tales. And, instead of focusing on Christmas exclusively, each third focuses on a different holiday, at least after a fashion.

The segments are solid little shorts, and are certainly worth your time. But, despite the return of Al Gore's head in a jar (played, as always, by Gore himself), it's not one of the stronger episodes.
00's 2010 90's Comedy Episode Erin Snyder Highly Recommended Science Fiction