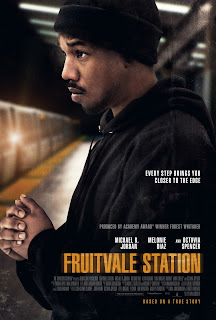 Of all the movies we've discussed on this blog, Fruitvale Station's relationship with the holidays (specifically New Year's Eve) is by far the most tragic. The film takes place almost entirely over the course of that day and the following morning, when Oscar Grant was killed by police on his way home from celebrating.

The movie is less concerned with plot than with painting a picture of the 22-year-old victim, showcasing his relationships with his mother, daughter, and girlfriend. That's not to say there isn't a story - the events are absolutely structured into a narrative - but the real takeaway isn't how or why this occurred so much as the implications they have for the characters.

Oscar, played by Michael B. Jordan, lost his job a few weeks before the movie started and has been keeping this from his girlfriend Sophina (played by Melanie Diaz) and his mother (Octavia Spencer). Sophina is already upset with him after catching him having an affair, so he's reluctant to say or do anything that will make her angrier.

He's been out of prison for less than a year and is naturally worried about being pulled away from his family again. At one point, he has an opportunity to sell some drugs, which would help him with his financial problems, but instead dumps them into the ocean. He eventually comes clean with Sophina about his job and assures her he's really ready to get his life together. He wants to propose but is having a hard enough time getting together money for rent, let alone an engagement ring.

In addition to New Year's Eve, it's also his mother's birthday, so he spends a portion of the day preparing and eventually celebrating with his family. Afterward, he and Sophina drop their daughter off with her sister and go into town to celebrate with friends. At Oscar's mother's suggestion, they take the subway to avoid the danger posed by the roads.

On the train ride after the celebration, Oscar is accosted by an old enemy who recognizes him from prison. A brief fight breaks out, and police show up. Rather than deescalating the situation, they arrest Oscar and his friends. When Oscar objects, they pin him to the floor and eventually shoot him in the back. He's taken to a hospital, where he later dies, leaving his family to grieve. The last line of the movie is given to his daughter as she asks her mother where her father is.

Structurally, the movie is set up to mimic a typical story about someone turning their life around. It never spells out the New Year's symbolism, but it's implicit in Oscar's choices onscreen. All of this is tragically ironic, of course: because this is a true story, we know the new life he's trying to embrace is about to be ripped away from him.

The movie even opens with cellphone footage of the shooting, in case anyone watching is unaware - it wants us to know what's coming, even as it uses narrative tropes to make us unconsciously hope for a different ending. All of that makes the resolution even more devastating.

Is it even worth talking about the directing at this point? Fruitvale Station was Ryan Coogler's first feature film, and I feel like "went on to make Creed and Black Panther" says more than I could hope to. Suffice to say, this was excellently made. If you haven't seen Fruitvale Station and want to understand why studios were willing to hand him massive budgets, this will answer that question.

But that's far from the only reason you should watch. It's a fantastic movie, start to finish. It's touching, dramatic, and effective. Jordan of course stands out, but the entire cast does great work.

Obviously, this is highly recommended. It's an incredible movie.