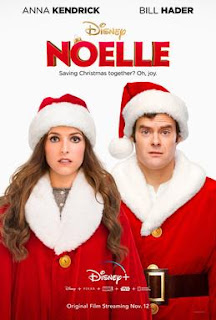 Noelle, one of a handful of made-for-streaming movies released with Disney+, feels like a derivative premise mulched by a committee that's still mostly redeemed by Anna Kendrick's presence and likability.

Kendrick plays Noelle Kringle, daughter of Santa Claus and therefore (Disney) princess of the North Pole. They're not afraid of using the p-word, either. Her servant elf calls her "Princess" as a nickname, and Noelle uses it herself at least once. Also, she has a pet reindeer she calls using the generic Disney princess song. Honestly, it was kind of nice to see a Disney movie where they embrace the term again instead of treating it like a insult.

Ever since she was a child, Noelle's wanted to do something important, but all the attention was placed on her brother, Nick (Bill Hader), heir apparent to the family legacy. Oh, I should probably have mentioned we're doing the whole Santa-bloodlines-thing they did in Arthur Christmas. In fact, there's a lot in the premise of this movie lifted from Arthur Christmas. Though the elves have far more power this time.

Eventually, the old Santa dies, prompting Nick to ascend. Or at least attempt to ascend: his training goes extremely poorly, and he seems to lack the magical abilities of the role (which mostly just boils down to naughty-nice detection, some psychic Christmas stuff, chimney travel, and the ability to speak all languages).

Nick starts freaking out, so Noelle suggests he take a weekend off. He takes her advice and leaves but fails to return. Everyone blames Noelle for her brother's disappearance, and her cousin, Gabriel, takes over. Gabriel is more or less a carbon copy of Steven Claus from Arthur Christmas, minus any sort of character arc or story point. He's almost an antagonist, only he doesn't actually do anything antagonistic. He just pushes a bad ideology that doesn't go over well. You could honestly cut him entirely and just go with "there's no one else to take over, so Christmas won't happen if we can't figure this out," and the plot would be unaffected. Fortunately, he's played by Billy Eichner, so he's entertaining regardless.

Yeah, likable actors salvaging this from massive structural flaws is definitely going to be a recurring theme in this one.

Noelle naturally steals the sleigh and tracks her brother to Phoenix, where she stumbles around making the same sorts of absurd errors Buddy made in Elf and Giselle made in Enchanted (they're more or less the same movie, anyway). Along the way, she enlists the help of a private investigator, Jake, a cynical but kind man trying to give his son the best Christmas possible after a divorce. He helps Noelle, and she (of course) helps him connect with his son.

With Jake's help, she eventually finds Nick teaching at a Yoga studio. She confronts him, but he has no interest in leaving. He never wanted to be Santa, and he was never good at it, either. Initially, they fight, then eventually she convinces him to try being Santa at the mall. He still fails, but sees her using the magic-Santa powers that she so obviously was going to have I didn't even bother mentioning she'd been exhibiting them the entire time she was in Phoenix. When the actual mall Santa shows up, a fight breaks out, and Noelle is arrested for kicking a police officer. She gets institutionalized, and Nick teams up with Jake to get her out.

They accomplish this fairly easily using the flying sleigh, while... honestly, they could probably just have shown the sleigh to the police, demonstrating Noelle was sane, and it would have had the same effect. Regardless, she and Nick return to the North Pole. To her surprise, Nick still doesn't agree to become Santa. Instead, he points out that *she's* the real heir to their fathers' legacy. For about ten seconds, there are a few gasps and people musing about whether a woman can be Santa, but the only one who actually seems hard to convince is Noelle. But, thanks to the clear, concise, logic of her intelligent brother, eventually even silly, emotional Noelle realizes she's the only one who can do the thing she's always wanted to do.

I'm being a little unfair, but the fact Noelle doesn't embrace her destiny or stand up for her rights undermines the point of the movie.

At any rate, she does the Christmas run, hitting snags and wrestling with insecurity. But when a kid finally calls her Santa, she gains the self-confidence she needs and gets the job done. Along the way, she wraps up the side plot with Jake and his kid, of course.

Then she makes the same basic changes at the North Pole Arthur made in Arthur Christmas, ensuring her family gets to be happy by doing what they actually want to do.

What else is there to say? Noelle doesn't really have much of a character arc, aside from not having confidence in herself and then gaining it. But the lack of self-confidence is only an issue in the third act: she sure seems to believe in herself when she goes to Phoenix.

There's really not much in the way of resistance, either. The whole sexism angle is overcome by one man recommending her for the job and an older man immediately announcing there's no rule against it, followed by everyone reflecting on how foolish they've been adhering to a tradition of male-Santas for two thousand years. Noelle is overlooked for most of the movie, but she never has to fight for her place in the world. This kind of drains the tension out of the film.

The scenes where she's finally delivering gifts and is working to overcome her own doubts are the exceptions, and these are probably the best parts of the movie. I don't think they make up for the fact the first 90% of the movie lacked emotional resonance, but better late than never.

But for all its faults, Kendrick is delightful in this thing, as are Eichner and Hader. The comedy works, and even some of the dramatic moments come off as touching, even if they're unearned structurally. This is one of the odd aspects about this movie - the writing is actually pretty good out of context. It's just that the structure is a mess, leaving the film without any weight. But individual scenes are generally enjoyable.

It's a shame this didn't have one more script revision (or, more likely, one less). It just needed to have a better story offering some tension. Ironically, the hard parts - building good characters, an interesting (if unoriginal) premise, and timely themes - were done. All they needed was a little structure. They didn't even need good structure: they could have just dropped this into a generic 3-act template, and it would have worked.

As it is, this is still a solid kid's movie and a good enough holiday comedy. But it would have taken so little to turn this into something really good if not great, it's a shame it falls short.
2019 Comedy Erin Snyder Fantasy Movie