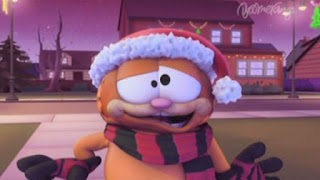 I put this on mostly out of curiosity. I actually do have some nostalgic connection to the lasagna-loving cat (I was just the right age to be suckered into finding the character's antics amusing during his heyday), but I've long since come to terms with the fact that - with the exception of a few decent specials - no version of Garfield holds up all that well.

I wasn't expecting this to be any different, but it turns out I was mistaken. This computer-generated Garfield series was far, far worse.

The writing's bad, but honestly that barely even registers. You could put Aaron Sorkin on this, and it wouldn't improve. The real issue is the animation - I sincerely doubt words can convey just how abysmal this looks. Imagine an uncanny valley trying to mirror a comic strip instead of a photograph. They lifted the character designs directly from the page but didn't adjust for the added dimension. Mouths aren't shaped - as a result, they just kind of warp like rubber when characters are speaking. The animators seem aware of this and try to minimize the effect by having a large amount of talking done while the speaker is turned away.

It's also worth noting whoever's making this doesn't seem to understand the medium they're working in. There's bizarrely little movement or motion, giving the whole thing a lifeless feeling. To quote a character in a Christmas episode of a far superior series, "For starters, you can move around more. Not much point in being animated if you don't."

The best aspect of the series is the voice cast. The legendary Frank Welker plays Garfield, while a number of minor characters are played by actors reprising roles from far superior shows and specials. But don't get your hopes up - the cast can't salvage this. If anything, they're wasted on sub-par writing and some of the worst CG I've ever seen in an animated series.

Let's move on to the Christmas episodes, shall we?

Caroling Capers is technically a half-episode. Like many animated shows, this one typically divides its 30-minute chunks into two mini-stories. Mercifully, only the first related to the holidays, so we were able to skip the second half.

The story here is fairly minimalist, even for its 12-minute runtime. It opens just before Christmas, with Jon preparing dinner. Garfield, unsurprisingly, is impatient. He sees a Christmas special on TV showing kids being rewarded with food for caroling, so he decides to try. Odie tries to tag along, but Garfield vetoes any kind of team-up since he doesn't want to share.

Garfield soon discovers he's an awful singer, and no one's interested in listening. By that time, Odie's teamed up with Nermal, and the two of them are successfully filling a wagon with food. Not surprisingly, they're not interested in working with Garfield.

After a handful of uninteresting attempts to improve and/or find someone to work with, Garfield cobbles together a bell instrument made of old cans. Now able to contribute, he joins Odie and Nermal, and the three of them get so much food, Garfield briefly thinks he doesn't have room for roast turkey.

The premise isn't exactly inspired, but there's no reason it couldn't have worked as disposable kid's entertainment. The fact the holiday elements only played into the premise and not the theme (i.e.: there was no moralizing, no Christmas miracle, no message about friends or family) should have at least let this stand out from the relatively monotone seasonal norm, but - again - the animation makes it virtually impossible to enjoy on any level. 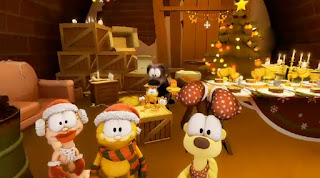 While Caroling Capers declined to engage in generic moralizing, Home for the Holidays embraces it. If you've seen almost any Christmas special or episode, there's not a lot here that will surprise you and certainly nothing that will impress you.

And in case it wasn't obvious from the "Parts 1 and 2" affixed to the title, this is a double-length episode (which really just means they filled the full thirty-minute slot, but that's still far more than you'd want to endure).

This one has two parallel stories going on: one centered around a small Christmas party thrown by Jon and the other about a group of homeless animals Garfield is trying to help.

Yeah. It's going to be one of THOSE.

Garfield gets invested in the homeless animals due to Arlene. He's originally uncaring and selfish, then later he isn't. I'd explain the causal connection if there were one, but the episode just kind of has him suddenly care without explanation.

Originally, he just stops by with some old cans of food, but eventually he decides to throw a sort of holiday party of his own to find homes for the animals. To attract people, they decorate a large pile of trash, then steal all of the decorations and food from John's party, which is already a mess.

But then Jon and his guests follow the decorated garbage pile and discover the homeless animals. The guests adopt pets, as do other people who randomly appear. Then they all eat, and everyone's happy.

I'm kind of glossing over details, but the writers were no better. Like Garfield's off-camera change of heart, there's a lot in this that never gets explained. The decision to steal stuff from Jon's party, for instance, comes out of nowhere. We never even see the animals decide to do so, nor is their reasoning ever clear.

Overall, this one didn't feel quite as offensively bad as the first, but damned if it didn't come close. I wouldn't swear to it, but I think the animation improved a hair, and - despite the leaps in logic - this had something closer to a narrative arc. But it's still horribly written and cheaply animated. There's nothing here worth wasting your time over. The "tis better to give than receive" nonsense has been done better countless times, and this adds nothing.
00's 2010 CG Comedy Episode Erin Snyder Sucks