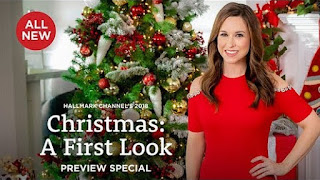 Back in late July, when only the obsessed started thinking about Christmas, Hallmark aired a program which is perhaps the purest expression of the holiday we’ve seen in some time. It is all anticipation and no substance, and it makes you feel somewhat unsatisfied and nauseated.

It is the Hallmark Channel's 2018 Christmas: A First Look Preview Special.

This is a half-hour program broken up into chunks with their own little intros and outros. It's very similar to the promotions that play in the theater before a movie, and I suspect these are intended to be broken up and used that way.

The host is here to introduce us to a selection of this year’s new Hallmark Christmas movies. She is wearing a Christmas red cold-shoulder dress with rhinestones around the holes and wondering where her career went so wrong.

The premise, so far as we can tell: young woman comes to town to help sick aunt, takes over a cookie competition, falls for young man who for some reason is a partner in the cookie thing. The woman looks familiar, and we finally figure out that she’s Danielle Panabaker, from Sky High and the Flash, and she deserves better.

This movie looks painfully bland. In his interview, the guy playing the romantic lead tries, but he says: “My mom is excited, my aunt is excited...” He can’t quite say that he himself is excited about this job. Someone bragged that there were two thousand cookies on set, and frankly that doesn’t sound like that many to me.

Next up is one called Christmas in Graceland.

In this one, the female lead is in town (buying a bank, or something?) and she’s getting back together with her old music partner. The lead is played by country music artist Kellie Pickler, and her acting is...not awesome. There’s a concierge in one preview scene, and her lines are painful. There’s a kid, and the kid’s overacting is also painful. Heck, the Christmas tree’s overacting is painful.

They would almost get points for including a tree that isn’t a picture-perfect Christmas tree, but I noticed that there is something holiday decorative in the background of every single shot; the set dressers went a little overboard.

Next, cast members from some other movie play “Tinsel Trivia.” I know that we're Christmas experts, but these poor actors are... whatever the complete opposite of experts are. Did they not script this? Is their utter incompetence at answering one single question supposed to be funny?
We also didn’t learn anything about their movie yet.

Another generic romance premise: woman runs cookie shop and believes in handmade cookies with love, guy believes in professional business practices and automation. This is Christmas Recipe for Love. (Note: not "Recipe for Love," that was a Hallmark movie last year.) This preview was mostly about cookie making, and featured such stellar lines as: “It’s not about the day; it’s about the moments.” and “It’s not personal; it’s business.” “And I am in the business of being personal.”

The poor trivia saps are back, and their movie is called Christmas at Pemberley Manor. They don't even mention in the material here that it's a modern adaptation of Pride and Prejudice. Maybe so many Hallmark movies are just repackages of Pride and Prejudice that it isn't a selling point any more. At any rate, the commentary is extremely vague about anything concrete about this one. Apparently she "shows him what's important," and he owns a big house. Okay.

Two to go. It’s Christmas, Eve stars another country singer; this time it's LeeAnn Rimes. She plays a school administrator who has to make budget cuts, up against the hunky music teacher.
They lampshade the idea of the “meet-cute” in the preview, which is almost clever, except not. Notable quote: "Having two step-sons, it was really important to me to tell stories that are of quality and that really speak to the heart." I guess people without kids only make movies that speak to...the brain?

The last movie is called Marrying Father Christmas. It's not about Santa. It's apparently a sequel to two other movies, but the characters are finally getting married. It looks like a very standard career versus love set-up, with a bunch of actors who are glad Hallmark is picking up the slack now that daytime soaps aren't prevalent anymore. And Wendie Malick. I hope she's getting paid well.

Okay, here are the big takeaways: it's going to be a white Christmas, because there is literally no diversity among the leads featured in these six movies.

Oh, and most important: Christmas apparently starts BEFORE HALLOWEEN on the Hallmark Channels, so you better watch out. It's coming soon.
2018 Lindsay Romance Short Trailer