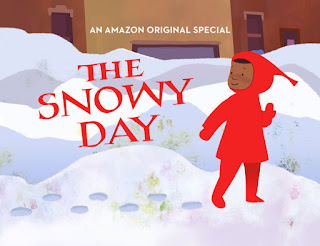 This new special based on the classic children’s book is a sweet, simple celebration of multiculturalism. It’s really targeted at young kids and those patient enough to watch with them, but it was pleasant enough for us to watch sans children.

It follows Peter through his adventures on a snow-filled afternoon. He wakes up to discover the huge piles of snow, and after snowman pancakes for breakfast (a new tradition, his mother points out) he heads out on a quest down the block to his grandmother’s apartment.

He encounters many denizens of the block, including shopkeepers and shoppers, friends and relations. Everyone is kind and friendly, even if some of them don’t have time to play in the snow.

Erin pointed out that this feels like it comes from the same place as some earlier Sesame Street: it’s an idealized version of New York City, where every nationality, race, religion, age, etc. lives together in harmony.

After Peter and his friend Layla chase off a cookie-eating dragon and build a snowman, Peter runs into a group of older kids, but while they’re not really mean about it, they don’t want to slow down to play with a kid as young as Peter.

He then makes it to his Nana’s. She’s made a special macaroni and cheese for their Christmas Eve party, and they head back together.

On the way, Nana stops to encourage the older kids to let him play, and everyone joins in the resulting snowball fight. Unfortunately, in the ruckus, the macaroni is spilled and some presents damaged.

Peter feels terrible that they won’t have their traditional food for the party, but both Nana and his mother reassure him, and he feels better.

At the party, all the friends Peter spoke to through the day come by to celebrate, and they each bring a little of their traditions to share.

The style of the animation is perfect - it pays tribute to the original while keeping it active and easy to watch. The action is punctuated with verses of a pretty, lilting song about the snow, and the child-friendly narration is by Laurence Fishburne.

As I said at the start, this is definitely for kids, but it was a calming, peaceful, cozy way to spend an hour. It's streaming on Amazon Prime.
2016 Lindsay Special