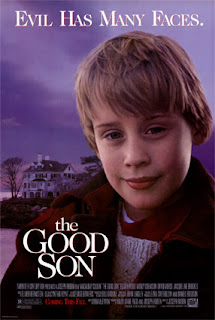 Once again, our tolerance for what constitutes a "Christmas movie" has been put to the test. This time, it's for entirely different reasons. Strictly speaking, The Good Son should meet our litmus test, as it seems to take place entirely around the holidays. However, that's really a technicality, as the producers don't seem to have realized that Christmas should be going on.

See, there's a line early in the movie establishing that the events unfold over "winter break." I'm assuming this was done to explain why no one needs to go to school. Unless there's another "winter break" I'm unfamiliar with, that means this should be set at Christmas. But at no point is the holiday referenced, nor are there any decorations or lights shown.

I'm going to go out on a limb and say that the winter break line was either an error or an artifact of an earlier draft, and that for all intents and purposes the movie was set over some mysterious two-week vacation in January or February.

In other words, this isn't really a Christmas movie.

So then. Why write about it at all? Because, while it's not set over Christmas, it does include a rather interesting connection to the holidays: Kevin McCallister himself, Macaulay Culkin.

The movie plays out as a dark finale to the Home Alone series, where the psychopathic nature of Culkin's character is turned on those closest to him. If I didn't know better, I'd almost think it was intentional.

But... I actually do know better. The movie was in production long before Home Alone came out. After Culkin became a star, his father wanted him to be seen as something more than a one-note comedic character.

Still, it's impossible to watch The Good Son and not see Kevin standing there, smiling knowingly at the camera, turning the same mind that tormented the Wet Bandits against any and all in his path.

Starting with Frodo Baggins. Yup, twelve year-old Elijah Wood plays the protagonist trying to thwart his evil's cousin's attempts to rack up a body count. It's difficult to convey just how surreal it is to watch this thing.

The story centers around Mark, who's spending winter break with relatives after his mother passed away. His cousin, Henry, quickly moves to befriend him, taking him to...

... You know what? Screw that. I'm not calling them Mark and Henry: they're Frodo and Kevin, and that's nonnegotiable.

It's clear from the start that Kevin's a weird kid, but at first it seems like his antics can just be chalked up to the fact he's a twelve year-old boy (they're all weird). As the movie progresses, he starts pushing the line, asking questions about Frodo's mother's body, talking about death, and being a jerk to his little sister (his actual sister, in fact - they cast Quinn Culkin in the role).

Things get a little darker when he unveils his newest invention, a homemade crossbow capable of embedding metal bolts in trees. Frodo loves this at first, until Kevin uses it to kill a neighborhood dog that chased them earlier. Kevin manages to convince Frodo this was an accident, allowing them to move on.

However Frodo is less understanding after Kevin makes a dummy, drops it from an overpass onto a highway, and causes a multi-vehicle accident. Around this time, he also starts to realize that the death of Kevin's baby brother several years earlier probably wasn't an accident.

But Kevin's smart. He manipulates others, using Frodo's fear against him as evidence he's the one who's got issues. It's not until after Kevin almost kills his little sister that his mother starts wondering if Frodo's telling the truth. But by then, it's almost too late. Kevin knocks his mom off the picturesque seaside cliff beside their house. She's barely saved by a visible safety wire that catches the stunt performer. The two boys fight while she climbs up, and she manages to catch them as they topple over. But she can't pull them both up, leaving her to choose which to save.

She saves Frodo, either because his dead mother's ghost inhabits her or because she somehow perceives how kick-ass Lord of the Rings will be in anther seven years. Regardless, Kevin McCallister's career falls to its death on the rocks below.

The movie's difficult to assess, largely because it's impossible to ignore the fact you're watching Frodo Baggins and Kevin McCallister wage a war of good versus evil. Both actors are completely recognizable, making it hard to divorce them from their roles. It doesn't help that there are a few moments which are eerily reminiscent of scenes from Lord of the Rings, including one where the two boys are hiding in a storm drain from police cars after causing the accident (I half expected a Ringwraith to ride over them). As an unintentional comedy, it's certainly better than any of the official Home Alone movies, but that's a low bar to clear.

There's certainly some intentionally decent stuff in here, as well. That stuff about Frodo thinking his dead mom would appear in another form - it may have been silly at times, but it also helped establish a sort of fairy-tale tone. Plus, they did do a good job with Kevin's psychopathy. He's much more grounded and believable than you'd expect (at least as long as you ignore how ridiculously effective he is).

But the movie has a lot of flaws, too. If it was going for psychological thriller, it fell short of the goal. Selling Kevin as scary when we've seen him do far worse in Home Alone just doesn't work. The movie's never frightening or even that disturbing: it's mostly just absurd. It's hard to place blame - the actors did good work, the director put it together nicely, and even the script seems to have merit. If anything, it's the casting that doesn't work, and half of that (Frodo) is only an issue because of what the actor went on to do. All that said, if they really wanted to make this a deeply unsettling horror, they shouldn't have cast Culkin. It's just impossible not to see him there.

Then again, that's really the only reason to watch this movie in the first place.

I'm labeling this "so bad it's good," though not for the usual reasons. It's neither as bad as the phrase implies, nor do the "good" aspects arise from conventional failure. But the experience of watching Kevin MaCallister portrayed as the villain we all always knew he was defies any other description. As long as you're familiar with the Home Alone and Lord of the Rings films, this one is surreal enough to be enjoyable.
90's Drama Erin Snyder Horror Movie So Bad It's Good