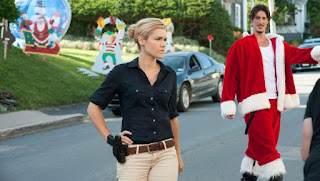 Ostensibly based on The Colorado Kid, a mystery novel by Stephen King, Haven is probably better described as a homage to the genre writer's body of work. It centers around a police officer drawn to Haven, a fictitious Maine town beset by strange phenomenon.

This is the only episode we've seen - naturally, we were drawn by its Christmas in July connections. And what connections those were: this episode offers not only a unique spin on that conceit, but a new Christmas/horror archetype as well.

It opens with a woman hearing Silent Night while surfing off the coast, seconds before being cut in half. Soon after, we cut to the town, where our main characters are finishing breakfast at the local bakery while holiday decorations are going up. This grates on police officer and supernatural detective Audrey Parker, since it's July. She gets into an argument with her partner, who dismisses her cynicism on the ground she just doesn't like Christmas.

See, while he knows it's July, he also knows it's Christmas Eve. Everyone in Haven does, in fact. And no amount of arguing or reasoning can get them to change their minds. But a off-season Christmas and some unnamed woman being cut in half aren't the only things wrong: people are vanishing, seemingly being erased from existence and memory. Only Audrey is immune (my understanding is that she's immune to all the weird stuff that happens in town). She hears a few bars of Silent Night right before it happens, giving the tune an even creepier vibe.

It takes a while, but we finally get some context for the woman cut in half: she was in the wrong place at the wrong time when a glass dome appeared over Haven. But this time it's not aliens - it's a snow globe. More specifically, Haven's being transformed into a giant snow globe, and a minor character Audrey met in a movie theater at the beginning's at the center of it all.

The girl in question inherited supernatural powers from her grandfather, who had a similar experience around model trains decades earlier. People around him vanished, never to return. But around the time all the series regulars but Audrey had disappeared, it was pretty clear this one would have a happier ending.

Actually, the ending was far too happy. Audrey helped the angsty teenage girl cope with her parents' separation, which allowed her to undo the damage. Everyone who'd vanished reappeared, having no memories of the day, and the woman who'd been cut in half... wasn't addressed by the writers. Instead Audrey made peace with the holidays, and threw a Christmas in July party for all her very confused friends.

The holiday elements were definitely the strong point this time around. The music, coupled with the growing sense of isolation as more and more characters disappeared, created a genuinely disturbing tone, even as the absurdity of treating Christmas itself as a formless, existential threat offered limitless humor. The Christmas in July concept only ratcheted up the comedy and creepiness further - bravo. This was a really inspired premise and execution... at least up until the end.

Calling the resolution sappy is an understatement: the writing in this scene got downright painful, and the attempt to parallel the girl's emotional problems with Audrey's own holiday reservations was cloying to watch. Things like this always make the mistake of shoehorning in a classic Scrooge-style turnaround, which is rarely satisfying. I'd have been far happier if Audrey had walked away from this more turned off by Christmas than ever - it would felt less redundant and truer to the character and her journey.

On top of all that, I'm actually kind of irritated they never got around to covering whether the surfer lived. Audrey had seen her body, but it vanished earlier. The fact we never saw her go to check makes her come off as a horrible police officer and person. Either there's half a woman on the beach waiting for a kid to trip over it, or there's a woman who's very lucky the unexplained temporal anomaly wasn't malevolent in nature. You'd think she'd at least look into it.

All that said, I liked the interesting twists more than I disliked the issues. While the characters and the overall premise of the series might come off as an amalgamation of X-Files/Twin Peaks/every other supernatural show on TV, the premise of this particular episode was quite a bit fresher. I still can't quite bring myself to label this highly recommended (the merits are skewed towards those of us who have seen a lot of Christmas episodes), but I enjoyed it quite a bit.
2011 Christmas in July Comedy Episode Erin Snyder Horror