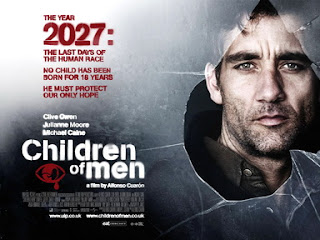 I've seen Children of Men twice now, and I'm still not sure whether or not it qualifies as a Christmas movie. It's essentially a post-apocalyptic version of the nativity, complete with numerous references, some in world, but there's none of the usual connections - no decorations, no mention of the holiday, nothing. Still, there's more than enough thematic resonance to tie it back (plus it shows on several lists of Christmas movies). Oh, and it was also released on Christmas in the US, not that that means anything.

Children of Men is often considered one of the best science fiction movies of the past decade. It was nominated for several awards, and it's currently at 92% on Rotten Tomatoes. It's not hard to see why: the movie was brilliantly shot and edited, and it's quite engrossing. It's just... it's also kind of boring and pretentious. And the premise doesn't make a damn bit of sense. I'm not talking about the "no humans have been born for 18 years" part of the premise. Actually, that's kind of absurd, too, but I'm completely willing to suspend my disbelief for the genre elements. It's the socioeconomic aspects that drove me up the wall.

The movie takes place in the near future. The youngest human alive just got stabbed outside a bar: he was eighteen. For some unknown reason, the human race stopped being able to have kids and is now on track for extinction. Again: no problems with the premise yet.

Basically, every country on Earth except for England has collapsed. It's not really clear why this occurred - there were scattered references to wars, disease, and other factors. Again, it's a little odd that England alone survived, but I'm mostly with them so far.

The government routinely rounds up immigrants and ships them to massive refugee camps, which are essentially concentration camps. This is at the core of the movie, and it gets to the heart of what the director's trying to say. While I'm with him on politics and ethics, I'm calling bullshit on the SF. The premise is built around a steep reduction in population, which should result in an increased demand for labor. Shouldn't England be importing workers from countries with high birth rates to look after their aging population? This is assuming they can lure anyone - the decreasing population density should reduce the incentive to flee agrarian areas.

A quick glance at the Wikipedia page for the novel this is based on makes me think these elements were better thought out there. I respect the director's desire to speak out on xenophobia, but I wish he'd actually built a science-fiction story around his ideas. This felt forced and contradictory.

Maybe this was the point, that the decreasing population was meant to reflect that of the first world (without immigration, most developed countries would be declining). If so, I'd have liked to see some of this in the movie: the absurdity of hunting immigrants despite the high percentage of elderly. It was something of an oversight that we rarely saw extremely old individuals. There were a handful, but not the huge number you'd expect.

Fortunately, the vast majority of the movie was better constructed. It was shot to evoke handheld footage, which gave the film a sense of realism. Likewise, the design was gorgeous. The actors were also phenomenal.

The characters are a little harder. The movie is surprisingly inconsistent when it comes to realism versus surrealism. There are a few minor characters who feel like they stepped out of a Terry Gilliam film, and they're completely out of place here. Likewise, we never really have a good sense of the major characters. The main character's backstory and relationships make no sense (his ex-wife is the leader of the resistance, his cousin is a major fixture in British politics, and neither of these facts is provided until they're relevant to the plot). His ex's feelings for him seem to shift from scene to scene, making her rather abrupt exit from the film more baffling than shocking.

From a Christmas perspective, the movie constantly evokes the birth of Christ. The iconography permeates the film, from the surrounding animals to the faithful gazing upon their savior, who is born at the end. I'd love to say that occurs on December 25, but the movie isn't specific on that count. The opening sequence occurs on November 16, 2027, which I believe is the last time we're given a specific date. There are a few brief points early on where time could be passing, but I think the math is more likely to take us to Black Friday than Christmas (though a case could be made - we don't really get a sense for how long it took the main character to get those important documents that never really came up).

This is absolutely a beautiful movie, though I think it's more than a little overrated. The film has a great message, but it stumbles trying to deliver it.
00's Drama Erin Snyder Movie Science Fiction