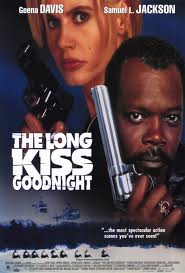 I loved this movie when I was in high school, but - despite having a copy - I haven't actually sat down and watched it in years. I'd more or less forgotten it was set at Christmas until I saw it on a list of holiday movies. I figured it would be cheating to count this as a "Christmas movie" and decided it would be a good time to re-watch it. Turns out I was wrong about it being a stretch: the holiday elements permeate the setting, tone, and music of the film. This is definitely a Christmas movie, and a fantastic one at that.

The Long Kiss Goodnight is directed by Renny Harlin, better known for Die Hard 2. The writing is credited to Shane Black (hence the Christmas setting, I suppose), though Wikipedia mentions there was some script-doctoring involved.

The movie is, among other things, absurd and implausible: if you can't suspend your disbelief, don't bother putting it on. But it's clearly not intended to be realistic. This is unapologetically pulpy: the laws of physics are suspended, and nothing has repercussions. But none of that matters, because the movie is just so damn cool.

Sure, the movie's cheesy, but it's also one of most fun action flicks out there. Geena Davis and Samuel Jackson are great together as an amnesiac superspy and worn-down private investigator. The movie sacrifices plausibility for entertainment, but it's surprisingly intelligent when it wants to be: for all its absurdity, the plot is incredibly complex, and the twists make sense even when the physics don't. This is essentially a love story without romance or a relationship; not an easy idea to deliver effectively, but they pull it off, largely thanks to clever writing. On one level, this movie can be viewed as indicative of 90's action excess: explosions that move just slow enough for characters to run out of the way, heroes who gun down dozens of enemies while casually sidestepping gunfire that miraculously always misses, and dialogue that clearly exists just to set up a one-liner or make someone sound cool: there's a reason Ebert didn't like it. But Long Kiss Goodnight owns those tropes in a way few of its contemporaries could. It rejoices in its genre and uses it as a setting, rather than a crutch. Plus the jokes are simply fantastic - and the Christmas ones are even better (I almost fell over laughing during the scene with the carolers, despite having seen it a half-dozen times already).

This is a great action movie and an even better Christmas flick. Highly recommended for anyone whose Christmas entertainment is otherwise lacking a sufficient body count.
90's Action Erin Snyder Highly Recommended Movie Spy