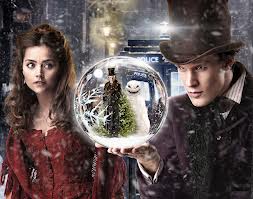 This is the first episode in the Pond-less era of Doctor Who. As such, it devotes quite a lot of time to mourning the loss of the Doctor's last companions, particularly Amy.

The episode begins in Victorian England, where the Doctor's more or less retired. His friends, Madame Vastra, Jenny Flint, and Strax are attempting to break him out of his depression, but not having much luck. Enter Clara Oswald, an energetic young woman with a dual identity as a barmaid and a governess.

Oh. There's also a curmudgeon who's being followed around by an army of evil snowmen from outer-space, but that's just the plot. Honestly, you could have cycled him out for just about anything without changing the core of the episode, which is about the Doctor coming to grips with the loss of Amy and Rory Pond.

Which is, frankly, a little silly. I understand that he cared deeply for these characters, but he's been around long enough to have lost dear friends before. And it's not like their end was that tragic: they wound up living out their lives together in New York in the mid-1900's. Also, that never made sense to me. Even if he couldn't take the TARDIS back to NYC in the 30's, couldn't he have sent them a message to meet him in, say, Boston in 1940?

Regardless, the Doctor starts out resistant to Clara, but she breaks through his tough exterior. Before long, he hands her a key to the TARDIS and invites her to come away with him.

Then she dies. Ha! Didn't see that coming, did you?

Actually, I suspect most of us DID see that coming. The episode foreshadowed it pretty heavily. Plus, we know something the Doctor doesn't: this isn't the first time she's met the Doctor. He came across a version of Clara transformed into a Dalek in "Asylum of the Daleks," at the start of the season. She died at the end of that episode, too.

The Doctor puts one and one together, and realizes that they're one and the same person. He then takes off to find another incarnation of Clara, reasoning that if two of her have appeared, there's got to be a third.

Oh, they stopped the snowmen, too. Using tears. Well, psychic tears. Psychic Christmas tears, if you want to get technical. Symbolically, I guess this was supposed to represent the family Clara was looking after dismissing the frigidity of the Victorian era for love or something. It was very Christmasy, in that it made very little sense and was probably supposed to be more emotionally resonant than it was. But that's been a fairly common trend with the Doctor Who Christmas specials: they tend to be a bit more melodramatic than the series as a whole.

Overall, this was a pretty mixed episode. I liked Clara, but she felt utterly out of place in Victorian England (probably best that's not going to be her final origin). I've always liked Madame Vastra and her human wife, but I felt like the writers were trying a little too hard to remind the viewer that they were a same sex/different species couple. Also, they didn't give Vastra anywhere near enough cool stuff to do. Vastra should clearly be a kick-ass adventurer in her own right, but here she just kind of felt like another one of the Doctor's sidekicks. Come on: you couldn't have let her carve up one evil snowman?

The snowmen were cool, but underused (probably due to budget limitations). They were creepy and effective: by far some of the best killer snow goons I've seen (and I've seen quite a few since starting this blog).

The best aspect of the episode was the WTF element of mystery: the borderline fairy-tale tone that Moffat excels at. I have no idea whether the payoff will be sufficient, but I love the bizarre situation around Clara. It's a cool setup, and I'm excited to see what comes next.
Adventure Erin Snyder Horror Science Fiction Special