Showing posts with the label Spanish
Show all 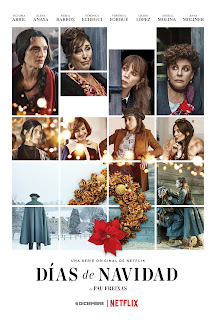 It's been a good time for foreign Christmas miniseries, thanks to streaming platforms being desperate for content. Continuing that trend is Días de Navidad, a three-episode Spanish show chronicling the lives of four sisters across different eras and - to a degree at least - genres. That last part is an aspect I'm probably going to fumble a bit, because I have a feeling there's an entire meta-narrative I'm missing concerning Spain's recent history and popular media. More on all that in a moment - first let's dig into that premise a bit. Actually, before we get to even that, let's start with a spoiler warning and a somewhat tentative recommendation. I liked this quite a bit, but I imagine the style and tone of this series will turn a lot of people off. This leans heavily on its drama and at times almost feels like a soap opera (albeit one with money to burn). To be honest, I'm not sure why this didn't bother me more - normally, I don't give drama t
Post a Comment
Read more
More posts