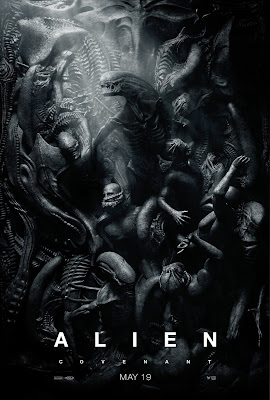 When this movie came out, I asked the first person I knew who watched it one question. I didn't care if it was good or bad, intelligent or idiotic, whether it tied to Prometheus or to the original movies... I just wanted to know if it was set at Christmas. The person I asked assured me it wasn't.

Turns out, he was wrong.

To be fair, you really needed to be paying attention to catch it. The first shot after the intro provides the movie's only date: December 5, 2104. 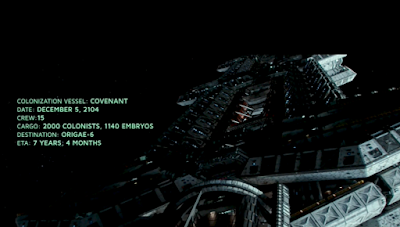 The ship is almost immediately damaged, requiring repairs before they can continue on their journey. Helpfully, the movie tells us it will take about 48 hours to make those repairs. That takes us to December 7. At this point, they decipher a message and change their destination to a planet "a few weeks" away.

Assuming "a few weeks" translates to fourteen days, they arrive at the film's alien-infested world on December 21. Where do I remember that date from? 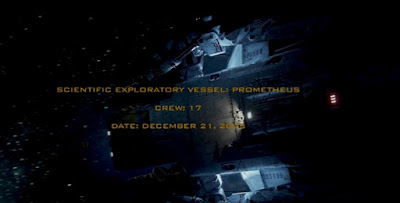 Yup - it's the date the Prometheus reached LV-223 eleven years earlier. And of course it's the solstice, as well as a few days before Christmas.

I'll admit it takes some assumptions to get the date exact, but at the very least it's within a week and change. There's absolutely no reason to give a date at all (check out the original Alien - the overlaid text doesn't bother with month or day), so this really has to be intentional.

Or, to put it another way: "Yes, Virginia, that is a xenomorph punching its way out of your chest."

For those of you who didn't see Covenant (or did but forgot it due to the utter absence of anything memorable), the movie focuses on the crew of a ship hauling two thousand sleeping colonists (along with a bunch of fetuses) towards a distant world. Like Prometheus, this ship also comes equipped with a Fassbender unit (please insert girder).

This time, Fassbender plays "Walter," a somewhat sterner and less affable android. But he's also less murdery than David, so I guess it averages out.

Actually, he plays David, too. The intro shows us David's awakening, back when Weyland flicks the switch on his back from off to on. They establish David's sense of superiority towards humans, who are looking for their god, while he's already surpassed his own. Whatever.

Cut to Walter looking after the ship in a relatively dull callback to Prometheus. Out of nowhere, a neutrino burst fries the ship and kills the captain while he's in hypersleep. The rest of the crew (though not the passengers) wakes and are understandably shaken. In particular, the captain's wife, Janet Daniels, is devastated. Though, since she's the movie's Ripley stand-in, she pushes through her grief and gets to work pretty fast.

While repairing the solar sails, they find a transmission coming from a nearby planet, one that's more habitable than the world they were going towards. Since no one really wants to trust the hypersleep pods again, they decide to check it out, despite the fact Daniels is against it. There's no logical reason Daniels is opposed to the idea, mind you; protagonists just have a weird sixth sense in these movies.

They land in a shuttle, split up, and pretty quickly get a refresher course in why you'd generally want to wear containment suits while exploring new worlds. A couple of them get infected by spore versions of the black oil from the X-Files the black goo from the previous film. They of course die horribly when neomorphs burst out of their bodies.

Neomorphs, for those of you who aren't familiar with the toys, are streamlined, white versions of the classic alien. They're fairly cool looking, at least compared with anything in Prometheus. In a better movie, they might even have come off seeming creepy.

The shuttle is of course destroyed in what I can only describe as a farcical comedy of horrors, and a passing storm knocks out communication with the ship above. The crew is ambushed by more neomorphs, who are suddenly everywhere.

Just when it seems like they're all going to die, David shows up and scares the neomorphs off with a bright light (to be fair, Pitch Black stole from the Alien franchise first). He then brings them back to his evil lair and lies about how he got there.

I'll skip over the layers of deceit: between movies, he murdered Elizabeth Shaw, exterminated the home world of the Engineers with their own bio-weapons, and has been genetically engineering a better alien. In other words, he's created the facehuggers from the original movie.

Congratulations, Scott: you've done the unimaginable. You've made me miss the now out-of-continuity backstory from AvP.

David uses a facehugger to impregnate the new captain, who dies in an unintentionally hilarious scene, then attacks Ripley Alexa Shaw Daniels. She's rescued by Walter, who stays to fight his counterpart while Daniels runs off to join the other survivors (there aren't many at this point).

The rescue ship arrives just in time for an obligatory battle with the xenomorph. The android who is totally, 100% Walter shows up, as well, and the survivors make it off after a fairly pointless fight that probably cost tens of millions in effects. Everyone gets back to the ship and takes a breath... until an alien bursts out of the chest of a wounded survivor. The movie shifts gears into an Alien rehash, culminating with a ridiculously over-complicated finale in - you guessed it - an airlock.

Just as Daniels is about to fall asleep, she realizes that Walter is... wait for it... ACTUALLY DAVID. I know. You're as shocked as Picard was when he realized Wesley was right about Data/Lore all along.

This revelation comes a little too late, though - she's already locked in her pod, which puts her to sleep. The movie ends with David gaining access to the colonists, the fetuses... everything he needs to carry out his experiments.

Normally, I hate endings like this, but by this point... I was mostly just glad the movie was over.

To be fair, this wasn't as much of a mess as Prometheus. There were definitely pacing issues, but nothing as egregious as what we saw last time. Likewise, the minor characters acted stupidly, but not to the same degree. I mean, sure, you have to accept that they're wandering around an alien world without hazmat suits, but the movie actually sells this better by never introducing them in the first place. At least they're not pulling them off and poking giant worms.

And, yes, it constantly feels like characters walk into clearly delineated "death zones." And a few characters deliver "Here's my dumb trait/motivation" speeches. And COME ON: WHY WOULD YOU ASSUME ONE IDENTICAL ANDROID COULDN'T IMPERSONATE ANOTHER?

But all of that together still can't compete with the level of unsurpassed stupidity that was Prometheus. Even accounting for the fact that almost all traces of what should have been the most complex civilization in the history of the galaxy disappeared after ten years, this still makes more sense than its predecessor.

In case it wasn't obvious, that's still not saying much. The aliens were fine, but the staging of the action and horror scenes were pretty rote. There are far more cliches than surprises, and I found myself bored when I wasn't laughing at the absurdity of it all. I'm usually a wimp when it comes to horror, so that's kind of pathetic.

So then. Let's talk about Christmas. Or rather, let's try to. Unlike Prometheus, which offered decorations, music, celebrations, and discussions, this one slips the date in under the radar. If you're not looking for it and willing to do the math, you'll miss it entirely. In normal situations, I'd rule the timing was accidental, but here... I know better. Because this is following Prometheus - because he's reusing the season (and, as far as I can tell, the exact same date) - we know that Scott has a reason for this. It's just a question of how much brainpower we want to waste wondering what it is. 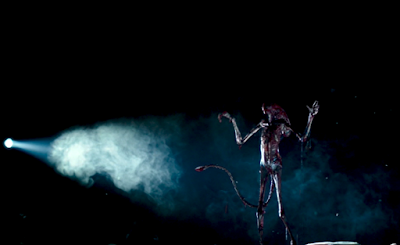 Alright. The obvious is the whole inversion of the birth of a savior thing. David certainly sees himself as being a god (arguably, he views himself as being above the gods, since he wiped them out), and the xenomorphs are basically his children. Thematically, it makes sense for them to be born at Christmas - they come from a twisted version of an immaculate conception, after all.

I'm guessing that's what Scott was going for. Then again, it's certainly possible there's a more pretentious backstory I'm missing. I didn't catch any more connections to the alien Jesus like the ones in Prometheus, but that doesn't mean there wasn't something in the background.

There is plenty more religious symbolism, though I'm not sure it adds up to much. The birth of what's essentially the first xenomorph culminates in it holding up its hands in a crucifix to mirror David, there's a big deal about the faith of the man he bursts out of, near the end we're shown a photo of the crew that more or less recreates the last supper, Daniels is basically cosplaying as the Virgin Mary in her last shot... and so on and so forth. 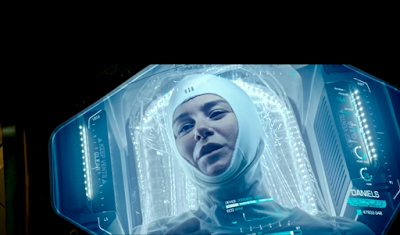 Ultimately, I'm not sure it matters. These two movies are easily some of the strangest holiday installments out there. As a Christmas nerd, I love that they exist. As a fan of the first two Alien movies, I wish they'd never been made.
Erin Snyder Horror Movie Science Fiction