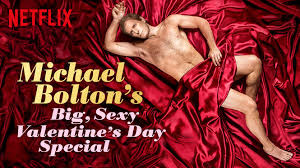 The second most surprising thing about Michael Bolton's Big, Sexy Valentine's Day Special is that's it's got a surprising amount of Christmas in it (the most surprising, obviously, is that it's actually worth watching, but I'll get to that in a moment).

This is a holiday special produced as a collaboration between Comedy Bang! Bang! and The Lonely Island. Blending together elements of old-fashioned Christmas specials, musical parodies, telethons, sketch comedy specials, and some 90's nostalgia, it sort of feels like a series of SNL music videos expanded into a short movie with a frame story.

The plot is pretty thin, but Santa Claus plays a crucial rule (hence this write-up). The elves made too many toys, so Saint Nick enlists Bolton's help, hoping that a Bolton Valentine's Day special will result in 75,000 more pregnancies and by extension 75,000 new babies born before Christmas. The special's opening number, "Ten Months 'Til Christmas," leads into this and does a nice job bridging the gap between Valentine's Day and the Christmas-special elements intrinsic to the format.

Ultimately, it's a bizarre premise. But of course it's aware of that, so a large number of jokes wind up being self-referential. The success of things like this always comes down to the comedy: if the jokes work, the special works; otherwise, it falls flat.

I really thought this one worked. Bolton does a good job deadpanning his lines and committing to the requisite parody musical numbers. My favorite two were the aforementioned "Ten Months 'Til Christmas" and a new version of Bolton and Lonely Island's 2011 song, Jack Sparrow.

For the supporting cast, they didn't skimp on the talent: an astonishing number of famous comedians show up for a skit, song, or a couple jokes. Not every gag or sketch was perfect, but I found the majority funny.

The special plays out like a parody movie from the 80's or 90's. That means there actually is a plot (at least nominally), but the story beats deliver laughs instead of drama or emotion. It's definitely a throwback to an era before homage became the dominant form of comedy, but it works well here. I'm as big a fan of homage as anyone you're likely to find, but it was refreshing to see an unapologetic spoof as a change of pace. We don't usually get things like this unless they're short or bad anymore - this is almost feature-length, and it's hilarious.

And obviously I'm always happy to see Santa given something to do outside of December. In addition to his scene early on, he mans one of the phone lines at the telethon, where a bunch of celebrities are keeping track of the number of kids conceived during the special. He also plays a pretty crucial role in the resolution, but I'm going to keep quiet on that for fear of spoiling it.

This is pure, undiluted comedy - if that doesn't sound interesting to you, you probably won't want to bother putting this on (unless, of course, you're a huge Bolton fan). But if you're looking for some laughs, this is definitely worth checking out.
2017 Comedy Erin Snyder Musical Parody Special Valentine's Day