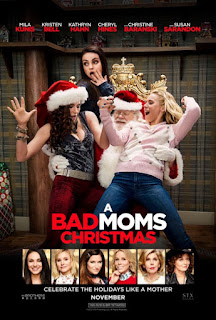 I never saw the original Bad Moms, though it's worth noting that the synopsis on Wikipedia makes it sound as though it has something resembling an actual plot, which already sets it above its holiday sequel.

Usually, when I say a movie is difficult to describe in terms of genre, it's a compliment. In most cases, I'm saying a movie transcends boundaries or exists in its own space. Sadly, that's not the case here. A Bad Moms Christmas is a mangled mess of tones, ideas, and tropes. It attempts to be three movies in one, and I'm not even referring to the three distinct storylines following three grown women and their mothers.

That would have been a far better approach - write one woman's story as a farce, the second's as a light comedy, and the third's as a grounded drama - then play with blending these tones when the characters come together. That could have been interesting.

Instead, they just kind of write each scene using one of three tones. If there&#…
Post a Comment
Read more

My Little Pony: Friendship is Magic: Best Gift Ever (2018) 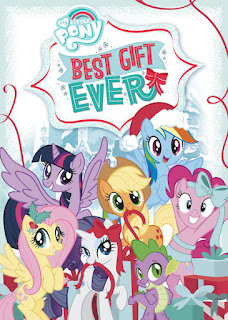 After eight seasons, a theatrically released movie, a series of spin-off movies and shorts, comic books, and soundtrack albums including a non-canonical Christmas album, you’d think My Little Pony had done everything. But what it hadn’t done until this year was a holiday special.

Best Gift Ever is that hour-long (45-ish minutes) special, and I’m happy to report that it’s so good that we’re thinking of adding it to our standard holiday rotation. It’s charming, funny, and sweet. It features interlocking plotlines that build on everything we know about these characters without being so complicated that you have to have seen every episode to understand. It’s on Netflix, and if you’re a fan of the show, go check it out now, before I get into the plot.

It takes place either the day after the season eight holiday episode or the next year, depending on how much handwaving you want to do around the end of that episode. (The multi-species student characters featured in that episode are seen br…
Post a Comment
Read more 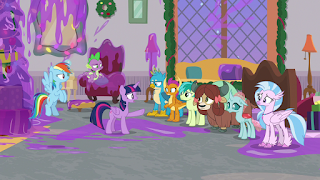 This is the fourth holiday episode of My Little Pony: Friendship Is Magic, so it's no surprise that they decided to expand the focus a bit more. A quick warning: this is less of a standalone episode than the other seasonal offerings, as it focuses almost entirely on new characters.

In the latest season, the show takes advantage of the world that has been building up over the previous seasons and the movie. Twilight opens a school to teach friendship lessons to both ponies and creatures from beyond Equestria. There is a group of core young student characters representing all the various species, and they're the focus here.

It's almost Hearth's Warming, and the school is going on a holiday break. All the students are getting ready to head home. Then a mysterious figure pours a substance onto the spell at the top of the tree in the common area, and it explodes into a mass of sticky purple goo all over the room. Twilight and Rainbow Dash chase after the perpetrator, but t…
Post a Comment
Read more 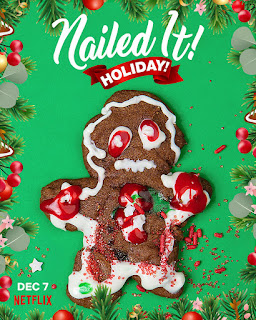 Nailed It! Holiday! is the third season of a tongue-in-cheek baking game show streaming on Netflix. The title and premise reference the meme in which abject artistic failures attempted by amateurs are ironically celebrated. In keeping with that theme, each episode (with one exception) features three amateur bakers who compete for $10,000 cash.

We watched through all seven episodes in this holiday-themed season. I know we typically break these out into episode-by-episode chunks, but the structure doesn't change from one to the next, and - aside from a few thematic shifts and guest judges - there's not a lot to discuss. With a few exceptions, everything kind of blends together.

I'll get to those exceptions in a moment, but first I want to touch on the season (and presumably series, though these are the only episodes I've seen) as a whole. To its credit, it's nowhere near as negative as the premise implies. Yes, the contestants are trying (and failing) to recreate co…
Post a Comment
Read more 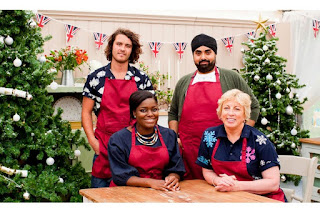 For several years now, The Great British Bake-Off (Great British Baking Show in the U.S.) has produced special holiday episodes. Only one set of these episodes has been made easily available here across the pond that I know of.

These two episodes had all the charm and warmth of the standard GBBO with a holiday flair. Each episode is a four-person competition with one winner. One episode wouldn’t be enough time to get to know new contestants, but they are all from recent seasons of the show, so it’s nice to see them again with another chance to shine.

It’s not just the holiday vibe that had contestants supporting each other, admiring each other’s work, and taking pride in personal bests. This is a ridiculously feel-good show.

Like a standard episode, the competition consists of three rounds: a signature challenge where the contestants must execute their spin on a specific assigned baked good, a technical challenge where they each attempt to follow a bare-bones recipe they’ve never see…
1 comment
Read more 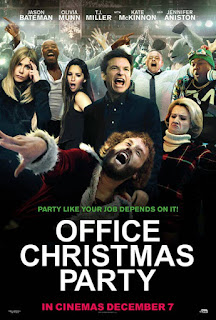 Office Christmas Party was an R-rated holiday farce, which at this point is really a sub-genre in itself. Blame the success of Bad Santa if you like - I'm pretty sure at least one of these has been made every year for the last decade or so.
This one falls somewhere near the middle of the pack. If you can make it through the first two acts, the film's climax is actually quite a bit of fun, but getting there is a commitment. Nothing in here is awful, but until the plot fully spirals out of control, it's fairly tedious.
And...
I feel like I've written this before. I mean, this is basically what I said about A Very Harold and Kumar 3D Christmas: the set-up was boring; the payoff was solid. Same with The Night Before (though that didn't take quite as long to pick up). I guess it's a common issue with these movies.
Let's get to the premise. It's about, well... an Office Christmas Party. Okay, there's a little more meat, but not much. The party is being t…
Post a Comment
Read more

Book Review: The Haunted Man and the Ghost’s Bargain 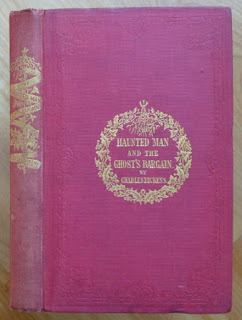 
The Haunted Man and the Ghost’s Bargain, A Fancy for Christmas-Time
Charles Dickens, 1848

For the final one of his “Christmas Books,” Dickens returns both to Christmas and firmly to the supernatural.

If The Chimes is a morality play, The Cricket on the Hearth is a romantic comedy, and The Battle of Life is a soap opera, The Haunted Man and the Ghost’s Bargain is an episode of the Twilight Zone. It’s a well-done, if straightforward, “be careful what you wish for” tale.

The story follows Professor Redlaw, who is said to look “haunted.” He was wronged as a young man when a friend married his sister, leading to her death (I think - this part of the plot is fairly vague), and he thinks constantly about this. One year at Christmas, a phantom who lo…
Post a Comment
Read more
More posts